The emerging market foreign exchange basket just witnessed its largest 4D drawdown since Lehman.  That’s a -5.3% shift for a 5.2 standard deviation move over a ten year period.  This is an exceptionally powerful move which has NOT come to us without follow-on implications.

Over the last hundred years inside financial markets, we’ve found in each crisis there’s a metamorphosis, a transformation into another serpent, a far different beast.  In the 1970’s it was runaway commodity prices, a real energy crisis.  In the 1980’s, it was Savings and Loans.  The 1990’s brought us sovereign credit defaults (Russia / Long Term Capital) and the dot-com blow up.  By 2008, a full-blown sub-prime mortgage crisis was upon us.   The sad fact remains, central bankers along with regulators are often caught looking in the rearview mirror.  They’re literally oblivious to risk – we call them academics with blinders on.   Lost in the woods, this crowd has done a great job at taking leverage down inside large banks.   Yet, all they’ve really accomplished is a transfer of the leverage onto both sovereign (country) and corporate balance sheets.  Over long periods of time, when you prevent the cleansing process of the business cycle from functioning, capital oozes around the world into all the wrong places.  Bottom line, nice work central bankers (FOMC, ECB, BOJ, BOE, PBOC), you lit the fuse and now it’s about to explode.

Why a Strong Dollar Matters?

*$64T dollar-denominated, nearly all issued over the last 10 years.

Turkey, A Large Default is Near, Contagion Upon Us

Late this week, the cost of insuring against a debt default in Turkey overtook that of Greece, which is rated four notches lower by the “brain trusts” at Moody’s.  At the same time, investors sliced exposure to emerging markets as Turkey’s currency meltdown fueled contagion concerns and a host of global hot points added to the exit from riskier assets.

A Price to Pay 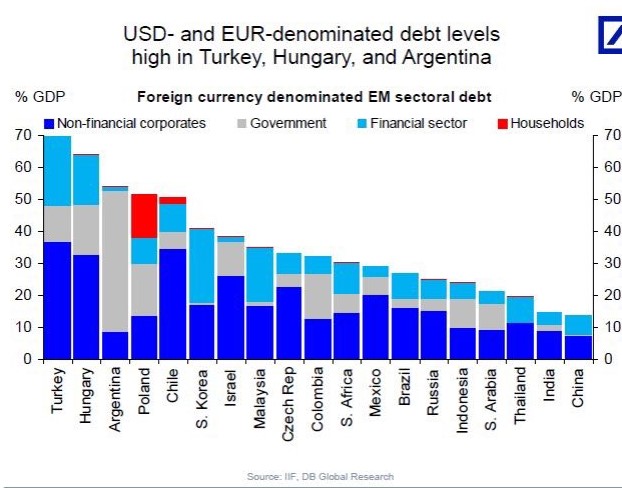 There’s a “Price to Pay” for the easy money Gravy Train which has come out of central banks.  Thanks to a Reckless Fed and ECB, Turkey was able to pile up loads of debt – NOT denominated in Lira BUT Dollars and Euros, TURN OUT the Lights.   The likeness of 2018’s Turkish credit crisis and the Asian credit crisis of 1997 is very real.  If you think of Turkey’s external debt near $450B, that’s nearly 57% of GDP.  Next, add on colossal corporate debt layers (see above) – you’re in a HIGHLY unsustainable neighborhood, near 70% of GDP.  Back in 1997, Thailand’s external debt was $110B or 64% of GDP, the panic that followed rocked global markets.  Over the last month against the US dollar, Turkey’s lira -48% (since July 6th) while one month into the Asian financial crisis the Thai baht was -24% against the US dollar.  In rare company – the lira’s recent collapse exceeded daily losses during Russia’s 1998 default and Brazil’s 1999 real crisis.

In June, in a rare public tongue-lashing, the Bank of India governor pleaded for the US central bank to relax balance sheet tightening plans, they didn’t listen.

The Turkish Lira has plunged against the dollar to record lows this week, fueled by concern about the nation’s worsening relationship with the U.S. and authorities’ ability to anchor the nation’s assets.  With close to $250B of US Dollar and Euro denominated DEBT, every 1% move lower in the Turkish currency brings a nasty 5 billion Lira interest coverage problem, it’s good night Irene.

In nearly every substantial macro-driven risk-off period, as the crisis kicks off US equities ignore the drama.  There’s a beautiful point in every market cycle; macro takes over lazy thinking. It’s a unique, special place in which all participants have to dig deeper into what’s actually going on within the solar plexus of the global economic system. WE ARE THERE RIGHT NOW, peace.  Clients are asking if this is 1998 all over again?  We say yes.   A Lira move near seven (close to a 6 handle now) wipes out most of the equity in Turkey’s banking system, and that’s on a $1T economy.  Contagion?  EU banks are 7% – 10% lower this month!

“MSCI’s developing-nation currency measure was headed for its biggest drop in almost two months, while an index tracking equities sank the most in a week. The lira collapsed more than 11 percent on Friday and government bond yields jumped to an all-time high as traders waited to see if a speech by Turkish President Recep Tayyip Erdogan would slow the exodus. The currencies of eastern Europe were dragged lower as the euro weakened on a report that the European Central Bank was concerned about possible risks for banks.”

Europe is facing BOTH US sanctions and tariffs on their major trading partners (China, Turkey, and Russia).  Above all, Europe’s banks are holding the bag – that’s the problem.  Here are the bag holders.  As of Q1 2018 Spanish bank exposure to Turkey 82.3bn dollars, France 38.4, UK 19.2, US 18, Germany 17.1 Italy 16.9 Japan 14. Switzerland 6.3 Canada 1.2 Austria 1.1. Portugal 0.3.  Turkey’s Lira touched a record low of 7.23/USD, the Argentina peso and Brazil’s real reached their weakest point in a month, while the Russian ruble plunged to its lowest level in two years – DEFAULT risk is RISING fast.

There’s clearly a flight to quality into German bunds, more disturbing is the price action in Italy’s yields moving higher on the heels of Turkish drama.  Yields on two-year securities climbed to the highest levels in more than a week as stocks worldwide declined following a 29 percent tumble in Turkey’s lira this month.  Bloomberg noted the Italian 10-year spread over German bunds hit the highest since May.  Deputy Prime Minister Luigi Di Maio was reported as saying in an interview Monday that his country won’t be subject to an attack by speculators.

Foreign banks in Turkey are exposed to the local government debt for $120 billion: French and English banks are first in line, with $40.4 and $23.9 billion respectively. – BIS Data.  At the same time, momentum is building in the US Senate for additional sanctions punishing Russia for election-meddling. The run-up to the U.S. midterms in November is a critical period for U.S.-Russian economic relations.  There’s clearly a Euro impact here.  Not to mention Germany’s largest trading partner in China facing tariff risk.

Global Equities: The World’s Trading Partners are in Some Pain

Too many investors are hiding out in US equities.  Tariffs on China, US sanctions on Turkey and Russia – that’s over $15T of global GDP under substantial stress.   It would be nice if the US equity market was on an island, protected from the global economy – but that’s not the case.  Turkey’s exports to Russia soared 52.5% last year, up to nearly 6% of GDP.  As a result, US sanctions on Russia just add to the Turkish economic dilemma, it brings DOUBLE trouble default risk.  US Russia sanctions + Turkey Sanctions = Rising Credit Risk.

Where’s the trade?  Pick up our latest report here.