The Fed governors have successfully talked the dollar higher.  So far Mr. Market hasn’t slapped them across the wrist, but we know that’s coming.

The U.S. Dollar posted its best monthly gain in almost two years on speculation the Federal Reserve is getting closer to raising interest rates as soon as June. Bloomberg’s Dollar Spot Index, which tracks the greenback against 10 major peers, added 3.7 percent in May, its best performance since September 2014.

At the Bear Traps Report, we made a bullish call on the U.S. Dollar on May 2nd.  For a look across the meadow of the next six months, winners and losers.  Pick up our latest Bear Traps Report here.

Wall St. has been lecturing us for two years to stay away from bonds.  They foolishly have been far too focused on the U.S. economic outlook, as well as the Fed’s lofty (bogus) assessment as to the path ahead.

As we’ve stressed since 2013, the global economy is driving the U.S. interest rate bus, not the Fed.

The bottom line U.S. economist keep getting wrong comes down to simple global math.  If $18T is growing at 1.8% to 2% a year, and $60T was growing at 5%, now 2.5%, the growth slowdown globally far over-powers the U.S.  Obviously, demographics are playing a large roll as well as developed markets are aging, more savers than ever.

Today’s $9T of negative yielding bonds are creating a panic buy into U.S. Treasuries.  As you can see below, large speculators are more bullish U.S. government bonds than ever, to us this is a near term sell signal. 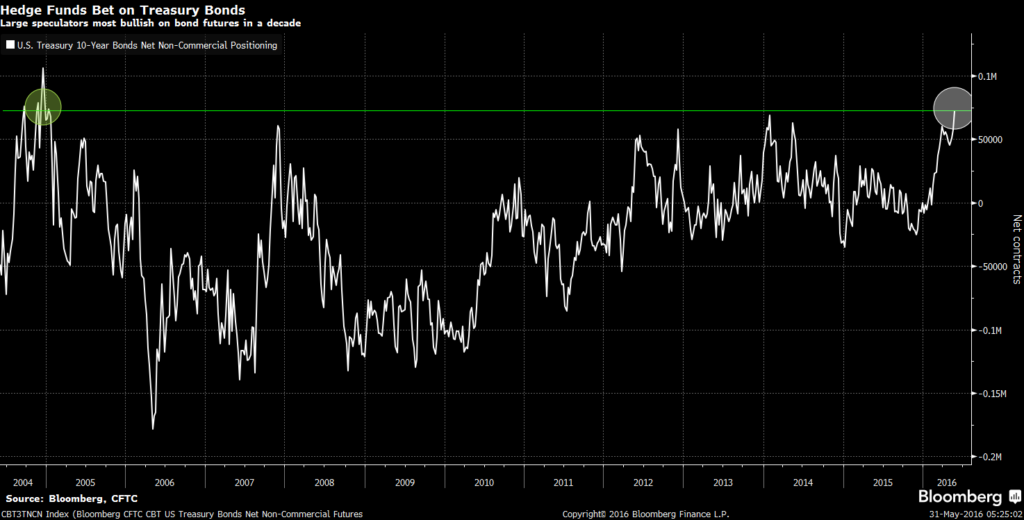 In a world of negative interest rates, U.S. debt looks like a high-yielder. Hedge funds and other large speculators boosted their net long positions in Treasury Bond Futures as of May 24 to the highest level since 2005, a report from the Commodity Futures Trading Commission showed. Treasuries with maturities of 10 years and longer have returned 8.5 percent this year as inflation gauges remain below the Federal Reserve’s 2 percent target. – Bloomberg

Once again, just as the Fed makes a move at a rate hike, the U.S. dollar surge creates side effects that explode in China.  We believe the PBOC (China’s Central Bank) wants to ease some of the depreciation pressure before the Fed interest rate decision in June.

As you can see below, over the last year as the yuan weakens, U.S. equity (stock market) volatility has surged.

As we stated last year in our Bear Traps Reports, we believe a bailout in the trillions of dollars is needed to the arrest toxic bad-debt levels dragging down China’s economy.

The 13 Most Dangerous Men on Earth

The most dangerous men on earth might just be those 13 men in a room in Beijing. We are witnessing a planned economy gone rogue, asset prices surging in some places, plunging in others. With all the Communist Party’s talk of giving markets a hand in prices, China’s financial system is still ruled by their highly LEVERAGED state-owned lenders. They swooped in to support the economy several times since 2008. Party leaders can order banks to make new loans or lock in generous forbearance agreements (extend and pretend) on others. The PBOC has also been expanding support for “policy banks” that support government objectives, re-inflating asset bubbles.

From 2006-8, I led a team that made over $100m betting against the subprime mortgage market.  Today, we’re seeing the same colossal failure of common sense all over again in China.  It’s shadow banking on steroids.  Beware, 25% of the (SEOs) state owned enterprises’ outstanding loans are equal to the entire capital base of China’s commercial banks plus loan loss reserves.  It’s leverage on leverage, on leverage.

We believe China’s currency is 20% over-valued.  As the Fed moves toward extended liftoff, the U.S. dollar’s surge creates a lot of pain for China, it unearths ugly flaws in their planned economy.

China must weaken its currency in an effort to stop the hemorrhaging of cash leaving the country.

As most know, China lost $800B last year in capital outflows (see the chart below).  As the dollar weakened in March, capital outflows in China took a well-needed breather. The Chinese yuan is pegged to the U.S. dollar; thus, a strong U.S. currency makes China’s goods sold around the world much more expensive. After the dollar’s pull back (March – April), China posted their two best export months in the last year.  But now the U.S. dollar is on the rise again (see below).

If you are a billionaire in China and you know your currency is dramatically over-valued, you are going to do everything you can to get cash out of the country and into dollars. This explains the record amount of U.S. acquisitions by companies in China, it’s the great cash run out of the country.

There are only two ways out for China, a substantial currency or credit devaluation. We think they will choose the former. With NPLs (non-performing loans) at 17% of outstanding credit vs what the PBOC tells us (less than 2%), it’s a mess. Bad loans are 8x to 10x than the bogus official numbers lead us to believe. Ultimately, we believe there is likely $700B to $1T of losses.

Over the last year, China has been busy throwing $50B bullets at a $5T problem. In recent months, the PBOC’s effectiveness has been seen in the money multiplier, which was at 5.2 in March. The nest result, for every yuan the central bank pumps into the economy generates 4.2 more through the process of loans generating new deposits that then create further loans. Next, the cycle keeps repeating, the bubble keeps inflating.

There are rising doubts in the market that China has not had a trade surplus since at least February 2013.   A reported (bogus) trade surplus of roughly $74B for Q1 2016,  we believe in reality was a deficit in the $90-$110B neighborhood.

A look at China’s current balance against net foreign receipts by domestic banks gets you an entirely different picture.

If you view the data this way, China’s foreign exchange reserves are in the ugly reality of $2.8T to $3T.

Join our Larry McDonald on CNBC’s Trading Nation, Tuesday May 24, at 2pm.

“The risk-reward in betting on Fed action in the July – September time frame is the most attractive in three months. Global credit and economic risks shot the March and June rate hikes right between the eyes, took the steering wheel out of Janet’s hands. This will position the Fed to start signaling for a July hike, sometime in the next 45 days. That would be a dollar positive; gold / commodities / EM negative. She’ll likely try and get back in the driver’s seat. In recent years, the rebound in Q2 vs Q1 GDP has been meaningful, north of positive 1%.”

As we witnessed last July and again in November, Fed governors are starting to prepare the market for a rate hike.

Why Should You Care?

Average stock market returns on days around when the Federal Reserve meets were over 20x the average trading day, per Bear Traps Report analysis.

Last September: Prepared the Market, then Backed Away

Beware of No Skin in the Game!

It blows my mind as to how many people focus on the latter, while ignore the former.  Too many economists espousing on Fed policy have NEVER taken professional risk.  Their dribble is couched in “no skin in the game.”  Thus, the crucial reality of the situation is often ignored.  There are colossal trades in both scenarios, see our latest Bear Traps report here.

In measuring the efficacy of Fedspeak, its far more important to watch for changes in a Fed Governor’s language, than Fed regional bank Presidents.  In order to trade stock, bond or currency  markets around central bank positioning, we must all be aware of who’s in Janet Yellen’s inner circle.

In the futures market, something funny happened on the way to the June Federal Reserve rate hike.

“If I’m convinced my own forecast is on track, then I think tightening in the June-July time frame is reasonable”
Fed Governor Dudley, May 21
“I think the incoming data have actually been quite good and reassuring in terms of policy decisions, so, in my view, June is a live meeting”
Fed Williams, May 17, 2016
“The most recent data are encouraging and consistent with the Fed policy committee’s view that inflation will gradually move back to target over time.”
Regional Bank President, Mester, May 12, 2016
“I wouldn’t take it off the table, markets are more pessimistic than I am.”
Regional Bank President, Lochhart, May 18, 2016
Voters Mester, Rosengren and George all spoke May 12, 2016.
All the recent Fedspeak is:

“telling us one thing, the market is still underestimating the expectation of a rate hike this summer.

Bottom Line: Fortunes will be made or lost in getting this summer right, join us here.

Back in December, we passionately made the point that “credit risk will veto the Fed policy path in 2016.”

Investments which benefit from a weaker dollar (emerging markets and commodities) will be standouts in the first half of 2016.”

It’s interesting to note below how well some emerging markets are doing relative to others.

South Africa’s 1% performance relative to Brazil, Russia and Chile speaks volumes to the political crisis in Johannesburg.  In the second half of 2016 we see a …  Pick up our latest Bear Traps Report here

Over the last year, the U.S. Dollar has been a global wrecking ball.  Since 2007, there’s over $10T of new dollar denominated debt on earth.  As the Federal Reserve has kept interest rates near zero for nearly eight years, global debt excesses have piled up, especially in emerging markets and commodities (oil) leverage.

Surges in the U.S. dollar now come with more global systemic risk than ever before.

If you’re trading stocks and not keeping a sharp eye on the dollar as well as policy hints coming out of the Federal Reserve, you’re sitting at the table at a disadvantage.

Fedspeak (FOMC governors on the speaking tour) and minutes from the April meeting, brought back bets that policy makers will raise rates as soon as next month. The dollar soared and brought systemic risk back on the front page.

One of our key 21 Lehman systemic risk indicators has been focused on China’s currency.

At the Bear Traps Report, our passion is focused on helping our subscribers understand leading risk indictors.  There are always warning signs which take place just BEFORE large, elevator shaft like drops in the stock market.  As you can see below, China’s “currency devaluation moves” have occurred just before the last two 13-16% drops in the S&P 500.

In recent days, the Chinese yuan is on the dangerous devaluation train yet again (see above), be warned.

There are several reasons for this leading risk indicator’s effectiveness, join us here to learn more.