A: Fed financing lev loans: Why wouldn’t they? Easier to soak the ground now than be trying to put out the fire later (credit fund).

Looking Down the Road Ahead

Our 21 Lehman Systemic Risk Indicator Index (LSRII) was developed in 2007. It focuses on tracking the contagion effect and provides good and bad signals in terms of effectiveness with one important finding. Like a reliable caddie in golf, the longer you’re together – the better he / she is. There was a group of revolutionaries who tried to stop the madness at the ill-fated bank, but one by one they were silenced. We explore the legendary lessons below, enjoy. 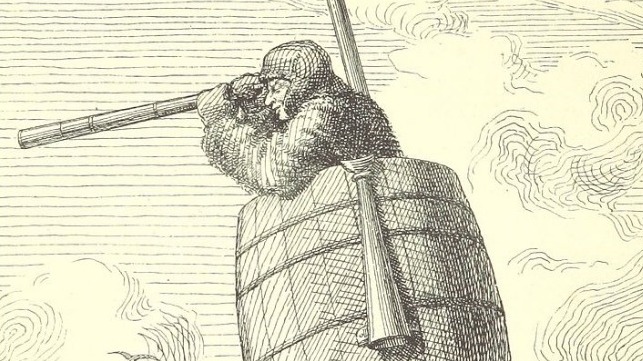 We know elephants leave footprints. Looking over the calm seas across markets, from the crow’s nest if a hedge fund manager David Tepper sees something meaningful risk wise, the first thing he does is takes 0.25% of this year’s p/l and deploys it at the cheapest, relative value protection. If David Einhorn joins him, Seth Klarman’s head trader as well, that’s fairly detectable. Of course, we have no idea what hedge funds are leaving the footprints, just using those three veteran investors as an example.

In daily interaction with over 300 institutional investors globally, our live Bloomberg client chat helps to provide clues throughout the year. From time to time we’ll hear about a large “print” either in HY CDX, S&P Futures, Forex vol futures, Eurodollar futures, etc. We’re attempting to measure the accumulation of hedges. More size, the more encroaching risk.

At Lehman, our team attempted to hedge the $6B ish of leveraged loans the bank got stuck with, so the origin of the idea comes from that painful experience.

Over the years, we have altered the index weightings relative to parts of the world where risk is most concentrated. In 2011, CDS on Eurozone banks (exposure to Greece debt) were an outstanding leading risk indicator for US equities, much the way US banks were in 2007-8.

Today, the index has been much more Asia focused. Italian bank CDS is still a decent Salvini political risk indicator as well. Above all it’s important to note, we’re starting to shift the focus – back on the US.

US high yield, leveraged loans, and CLOs are near $3.2T, add the $2.6T of BBBs, you get nearly $6T of risk assets. In the QT (quantitative tightening) world, the Fed cluelessly over-cooked the goose. They pulled too many dollars out of the system and tightened FCIs (financial conditions) far faster than they were aware of at the time (Q4 2018). The beast inside the market literally broke the Fed over its knee like kindling being thrown into the fireplace. It was a beautiful capitulation.

We MUST keep in mind – during the 2000-2002 credit cycle flame out, over 45% of the investment-grade universe oozed into “high yield” bond territory. Today that’s the equivalent of $1.2T of “fallen angels” (vs. $195B in 2000-2002)  – a flood of junk near unimaginable proportions. It’s no surprise the Fed caved in such embarrassing fashion, they had a large gun pointing at their legacy (head).

Today, they’ve deployed the QE fire hose (term repo + $60B/m tbills) but when the mark-to-market of say $150B (20 or so idiosyncratic events) of HY, CLOs, loans and junk IGs falls quickly, the ability of banks / hedge funds to hold these assets is highly unknown, untested. It doesn’t matter if $5.5T of the risk pool is just fine, come near year-end everyone has to put some cards on the table.

In our view, leveraged loan funds and ETFs are the new shadow banks, outstanding debt in this dark corner of Wall St. has surged to nearly  $1.5 trillion in the US. While Collateralized Loan Obligations are the largest buyers (about 50%), leveraged loan mutual funds and ETFs are the second-largest buyers comprising around 30% of the demand. Over the years we’ve learned, there’s a waterfall effect across credit markets. Stress in one pocket often leads to two and three fairly quickly.  Credit spread contagion MUST be meticulously monitored, especially with an accommodative Federal Reserve. After 3 rate cuts and a $400B balance sheet reversal from contraction to expansion – why are we seeing stress on the rise? Let’s explore.

As you can see above, debt to EBITDA multiples at issuance > 5x have surged dramatically. It’s clear to us, the longer the Federal Reserve doesn’t allow the business cycle to function – clearing out the bad actors – leverage on leverage continues to pile up. Look at 2019 relative to 2007, it’s screaming moral hazard at Mr. Powell. Debt multiples < 4x make-up just 10% of loan sale volumes vs. close to 30% in 2007.

Our friend Rod Dubitsky points out, leveraged loan funds offer the promise of daily liquidity, yet the underlying asset is fairly illiquid and the time to sell could be lengthy. Leveraged loans could take up to 21 days to settle, while the funds are required to meet redemption requests within 7 days, but in practice are expected to provide liquidity in one or two days. Innovation in financial products and ETFs has incentivized the unsustainable in our view. How can ETFs and mutual funds offer realistic liquidity on financial instruments inherently illiquid? 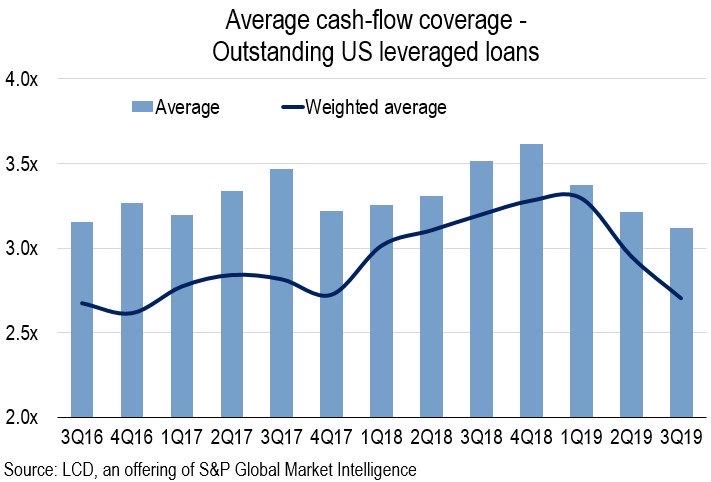 It’s a clear liquidity mismatch in our view, one that takes us back to the mid-2000s.

It was a morning in June 2005, one we’ll never forget. Michael Gelband, a Lehman Brothers managing director and the firm’s head of global fixed income, gave a presentation to our team of traders about the dark side of the real estate market. The meeting began just after 6:45 a.m. Each attendee was handed a dossier of about 30 pages.

In our 2009 global bestseller –  A Colossal Failure of Common Sense (now published in 12 different languages), there’s an epic scene where Gelband described the stunning proliferation of “no-doc” mortgages and other toxic loans, sold by commission-driven salesmen and then purchased by Lehman and other Wall Street banks.

“He cited the shadow banks, the vast complex network of mortgage brokers that were not really banks at all but managed somehow to insert themselves into the lending process, making an enormous number of mortgages possible while having to borrow the money themselves to do so. He cited outfits such as Countrywide, New Century, HBOS, and NovaStar, among others, and he accused them of creating well over $1 trillion in economic activity that was comprehensively false money and would never be converted into genuine economic power.”

Gelband predicted that the house of cards could soon collapse — perhaps in 2007 or 2008 — producing serious consequences for the U.S. economy.  After the meeting, Gelband didn’t stop pressing the issue. He used his position on Lehman’s executive committee to try to persuade the firm to pull back from its massive bets on the real estate market.  But warnings from Gelband and others with similar concerns were largely ignored by senior management at Lehman Brothers.

We MUST NOT ignore the current signals coming from the leveraged loan market – they are screaming loud and clear.

Are funds set up to meet a severe liquidity challenge in a distressed environment? We agree with Rod, “no way Jose”. While there have been redemption spikes (a surge in the number of people wanting their money back) even within the last year or so, they have been fairly brief, shallow and occurred during relatively robust economic times.

In recent years, the Fed has saved the day numerous times. First on ending rate hikes after promising to march on, then on quickly shifting to rate cuts, and finally a colossal capitulation on their beloved balance sheet reductions plans ($2.5T in reduction promises to recent $400B expansion of their balance sheet). There have been runs on leveraged loan funds, but each time the Fed put out the fire with a reversal toward far more accommodation. Even so, with all the Fed love, stresses are NOT going away!

Even after 3 Rate Cuts, a Downgrade Surge 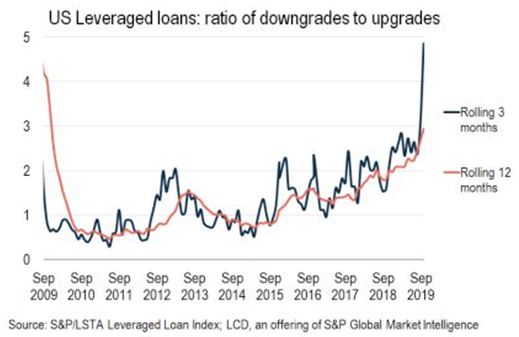 We believe the market is underestimating this liquidity risk should the market face a true, prolonged downdraft. In 2019, defaults in the U.S. leveraged loan space are approaching $30B. In October and November, defaults are nearly $10B, that’s about 40% of last year’s total in JUST two months.

*Fitch Leveraged Loan data, defaults spike to the highest level in 2 years, forecast year-end 2020 retail and energy default rates at 8% and 13%, respectively. A five-year-old can tell you the rating agencies are the last to get the joke in any default cycle.  Looking back over the last 70 years, credit cycles are littered with embarrassing flashes of rating agencies playing catch up on defaults. Hence, if the Fitch “problem loan” basket is up to $112B, it’s safe to assume that the number is substantially higher in reality.

Cash vs. Low Quality “B” Holdings

To assess the risk for redemption fails, we looked at two key measures for the top 10 leveraged loan funds (about $60B in total). Specifically, pay attention to the percentage of holdings of Single-B rated and below assets and the percentage of cash held by the fund (cash being a proxy for the ability to meet a spike in redemptions).

Houdini Liquidity, now You See it Now You Don’t 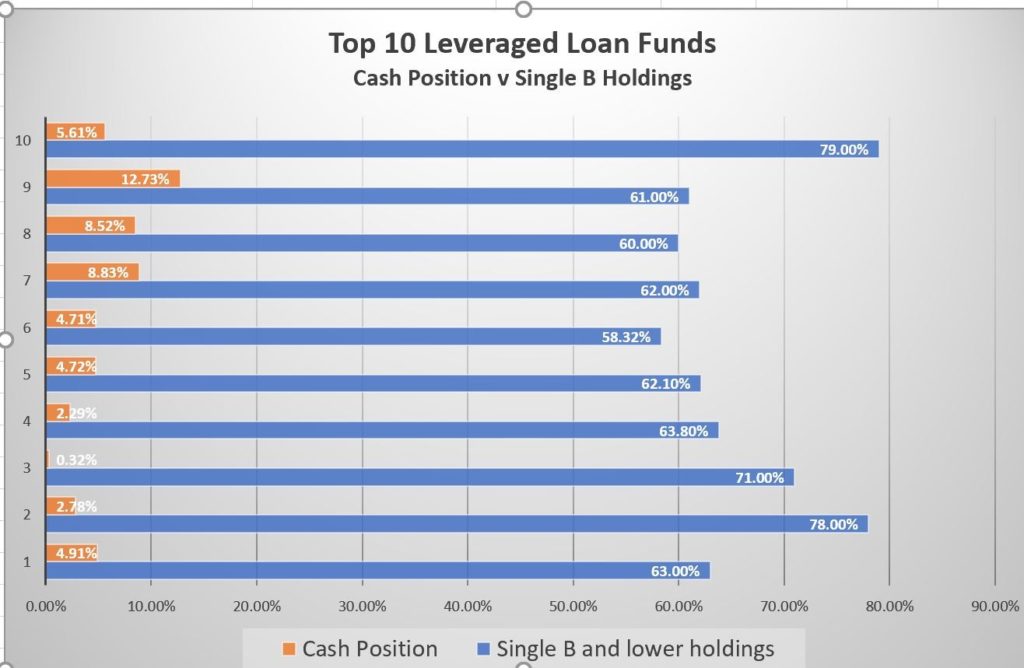 As the chart above shows, most funds have over 60% invested in single-B and lower-rated assets, yet typically have cash positions at just 5% on average. One fund held only 0.32% in cash and yet had over 70% in single-B and below assets. In a prolonged sell-off, the 5% cash would likely prove grossly inadequate in the face of reduced overall market liquidity, lengthening settle times and a spike in redemptions. In a severe downturn, it’s likely that a significant percentage of the loans would be downgraded to CCC, rendering sale much more difficult and all the while prices likely would be collapsing.

While some funds may supplement cash liquidity with access to a line of credit and/or holdings in more liquid bonds, it’s not clear either of these would be sufficient. Lines-of-credit may not be available when needed and even if they are drawn they may create a senior claim on the remaining assets thereby amplifying risk for those who remain in the funds.

The Blackstone GSO credit fund is loaded with lower quality (B rated) leveraged loans. It’s interesting with stocks ripping to new highs, B rated loans are under meaningful selling pressure as downgrades mount. If credit is weakening at this pace with a U.S. economy near full employment, what will happen when stresses mount?

There is a history both during the financial crisis and more recently of funds having to freeze redemptions due to lack of asset liquidity (most recently the Neil Woodford managed funds in the UK). In fact, in 2015 the Third Avenue Focused leveraged loan fund collapsed amidst a flood of redemptions.

Finally, cascading redemption freezes would likely reverberate through the entire leveraged loan markets including CLOs which would face greater difficulty in trading distressed loans and a deterioration in recoveries.

Rod Dubitsky has over 30 years of experience in the financial services and global development sectors.  Founder of The People’s Economist (TPE).  The bulk of his career had been spent in financial services working for rating agencies, wall street dealers, banks and money managers developing a range of market-leading, award-winning research, and analytical platforms. Frequently quoted in the media including Time Magazine, Forbes, NY Times, WSJ, FT, and Bloomberg.  While working in finance, he was a top-ranked analyst for Credit Suisse in the consumer ABS finance sector and led the newly create advisory analytics division for PIMCO with responsibility for overseeing some of the largest post-financial crisis bailout consulting engagements.