The Commerce Department´s first estimate of 4th quarter GDP growth came in at 6.9%. And yet all the polls show consumer pessimism and voters´ lack of trust in Biden´s handling of the economy. This seems like a contradiction, but it isn’t. The economy grew in large measure because of a COLOSSAL inventory build, which is a fancy term for businesses hoarding inventories, which in turn is caused by inflation. It is cheaper and safer to buy inventory now rather than later —- 4.9% of the 6.9% GDP growth was caused by panicked businesses hoarding inventories in a desperate attempt to front-run inflation and escape the worst of the nightmare supply chain. And it is that very same inflation that has made the American consumer, and voter, so pessimistic. The question begged is: if businesses are hoarding, are consumers hoarding as well? The answer? Of course, consumers are hoarding. This in turn implies that if businesses and consumers had not hoarded, then GDP would have been negative in the 4th quarter. This sums to a classic stagflationary economy. 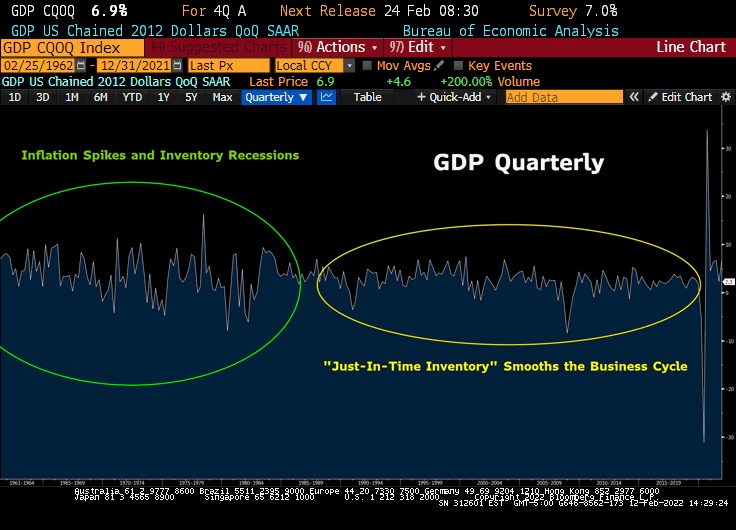 In the 1960´s, 1970´s, and early 1980´s, before the widespread adoption of “Just-In-Time” inventory management and attendant advanced technologies, business cycles were more frequent, predictable, and violent (SEE the green oval above), even adjusting out for supply shocks.  The Lehman crisis and Covid crisis aside, we see the business cycle became much less volatile thereafter.  This cycle – with the Fed forced to hike rates into a recession – we think U.S. GDP prints -6% to -8% somewhere in 2022 – 2023.

This brings us to the old-fashioned reason for recessions. Once upon a time, recessions were caused by excess inventory build. Businesses would over-estimate unit demand, produce too much, then reduce production and compensate by lowering costs, by firing employees. Recession, and bear markets, ensued. As we have detailed in our note on how the supply chain has affected the chemical industry, hoarding by business is a logical individual response to supply chain snafus, while collectively being a response that only further aggravates supply chain woes with increased demand, spurring on more inflation, spurring on yet more hoarding. A vicious negative feedback loop if there ever was one. And so inventories build and build as businesses and consumers both hoard.

Since late November, the XLP Consumer Discretionary ETF is dramatically outperforming the Nasdaq, +5% for the XLP vs. -14% for the QQQs. This is CLASSIC pre-recession price action – when the Coca-Colas and Proctor and Gambles are outperforming the Teslas and Microsofts – look out. What stops this inflationary spiral is ongoing negative real income. Eventually, consumers buy fewer things because they have less money in real terms. As unit sales fall below lower targeted inventory turns, the industry produces fewer goods. Fewer goods purchased and produced = recession.

We have not seen an old-fashioned excess inventory recession in a long time. We have become accustomed to crises like Lehman and Covid causing recessions, but, excess inventory recessions were once quite common. What made them less frequent was this: just-in-time delivery which in turn was made possible by advances in technology. By being able to more quickly adjust inventories to demand, by increasing inventory turn, in other words, businesses rarely found themselves with too much inventory. Inventory levels were “optimized” and so hiring levels were “optimized” in turn as well. This shift meant that the unemployment level that once caused inflation now gradually fell ever lower, from what economists once put at 6% to 3% or even lower in their revised estimation. The optimization of inventory levels optimized the entire supply chain. The result? No more excess inventory recessions.

But it turned out there was a risk to the optimized technology-driven just-in-time delivery supply chain. If a massive demand shift happened, the oh-so-delicately balanced and hyper-complex supply chain would clog up. And this clogging of the supply chain would metastasize into a crisis. This is what happened when people were given money to spend in lockdown. The goal of the stimulus checks was to avoid recession. The result is a delayed recession. This is the classic Cobra Effect: the government causing the very problem it attempts to solve. 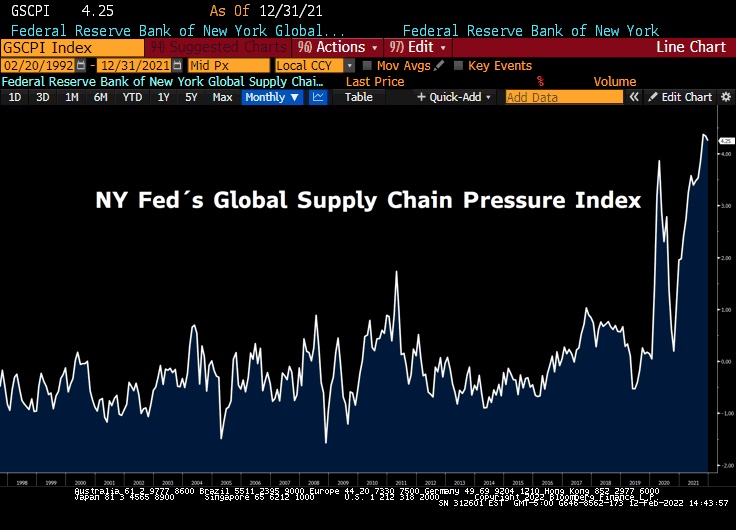 We see above the New York Federal Reserve´s Global Supply Chain Index that was recently introduced, measuring a variety of metrics and blended into a weighted output designed to reflect how the supply chain is doing. Obviously, with the advent of Covid, the supply chain went haywire and is quite snarled, with no obvious relief in sight besides unsubstantiated assurances that never seem to pan out.  Businesses & consumers are hoarding in response, further exacerbating the problem.

We are not in a full-blown recession yet, but we are heading there. We know for a fact that inventories are building and inventory turns are deliberately slowing or set to slow soon via businesses hoarding. We know for a fact that real wages are in decline. The collision of the two will result in an old-fashioned excess inventory recession. It has not gotten so bad as to affect the demand for labor… yet. It is anybody´s guess, but ours is that it will take a few more quarters for labor in the manufacturing sector to feel layoff pain as that is more a trailing effect of inflationary excess inventory build than coincident. Only at that point will the Fed abandon its incrementalism and go full Paul Volcker on rates, money supply, and bank reserve requirements. But at that point, it will be too late. It already is: the Cobra´s fangs are in too deep. 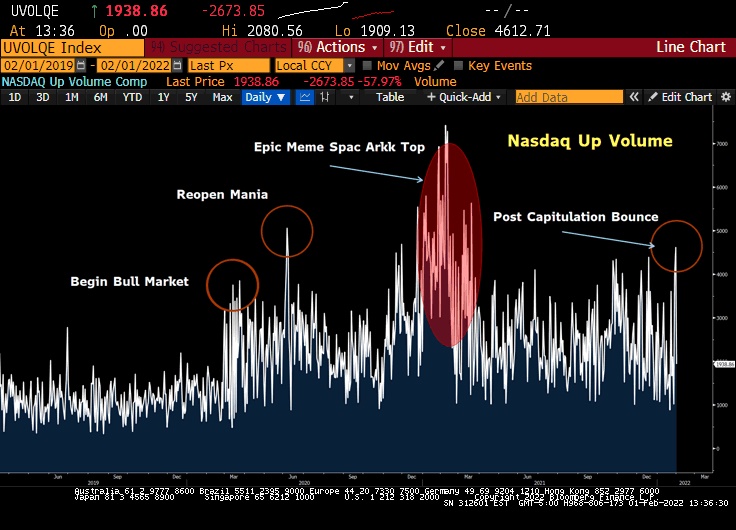 Trying to Break Out of the Bear´s Grip

Monday was the highest up volume day on the NASDAQ since then. Interestingly,  that up volume came after a real smash in many speculative names, a true bear market for over 50% of NASDAQ stocks. This was profit-taking by short-sellers, not the start of a new bull market.  It was short  – risk-off,  not long risk on. As well, it served to relieve an over-extended, over-sold decline.  That´s what bear markets do to set up another leg down. If we don´t get real follow-through upside soon, then this relief rally will prove a prelude to further pain.  Ultimately, the question facing traders: was the Monday up volume surge a prelude to a new extended bull run, or a prelude to a new bear decline? We side with the latter.