“The trade of 2018’s second half will come down to meticulously measuring the “tug of war” between the Federal Reserve and emerging market stress in global financial conditions. The Powell Fed has consistently claimed they’re U.S. data dependent. In obnoxious fashion with a splash of hubris, they’re “NOT concerned” with emerging market stress in financial conditions – we’re going to “stay in our lanes” has been the mantra. We wish we were back in the 80s listening to the Thompson Twins, but we’re NOT, there’s far too much GDP outside the U.S. today, over $60T. With a strong dollar and sky-high Q3-Q4 earnings expectations for the S&P 500, the trade for the next 6-12 months will be found in playing the (catch up) mean reversion between the U.S. and emerging market equities. Each month, as the Powell Fed has tried to stand their ground, day-by-day the beast inside the market is piling more and more pressure on them. Once again, this serpent will break the Fed. Get short (or underweight) U.S. equities and long emerging market equities. Once global credit risk invades America’s shores, pummelled emerging markets (Brazil $EWZ) will lead the way to higher ground.”

Fed Chair Powell and the S&P 500: “Not Concerned” to “Concerned”

Here’s a look at the S&P 500 and Fed Chair Powell’s posture on global financial conditions. With a splash of hubris, we’ve been lectured for nine months that the Fed is going to “stay in our lanes, the U.S. economy.” The latest shift from “Not Concerned” to “Concerned” has global equities moving higher. Since 2010, through all their denials, ultimately global financial conditions (FCIs) have been driving the Fed policy path NOT U.S. economic data, the Fed made a colossal shift this week.

Economic data in recent weeks is sending a message loud and clear. Regional Federal Reserve Bank Factory output readings and global PMIs are making the recent equity and credit market volatility look HIGHLY credible in forecasting future tangible economic weakness. As a result, with a fire hose in hand, Fed Chair Powell spoke this week alongside Janet Yellen and Ben Bernanke where we witnessed a further dovish shift from the Fed Chair.  Markets ripped higher in response to the Powell cave-in (capitulation from his Q4 2018 policy path stance). The re-pricing of Fed probabilities in the past four weeks has been on a historic run, from pricing 83% probability of a Fed “tightening” in 2019 to 30% probability of “an ease” has had a dramatic impact on Eurodollar spreads, stock and bond prices and of course interest rates. Let us review.

The Richmond Fed manufacturing survey for December came in exceptionally weak; -8 vs +15 expected. This is the lowest level since June 2016. This is yet another data point showing economic momentum in the U.S. slowing down, which will eventually be helpful in pushing the Fed to back off on rate hikes. The Markit Manufacturing PMI print came in slightly below expectations on Wednesday, however, the ISM Manufacturing PMI  released Thursday morning was a massive miss. Working with our associates at Astor Ridge, we expected the ISM PMI to come in well below expectations and calculated it could be as low as 54.0. Regional PMIs had seen substantial misses in the past two weeks and though the market was pricing in a significant drop from 59.3 to 57.5, it seemed to be overlooking the surprisingly poor regional data prints. Above are listed the Dallas, Philadelphia, New York, Richmond, and Kansas City Factory gauges, the dotted line is too close for comfort, recession territory.

Recent Highs to Lows in ManufacturingPMIs around the World

U.S. Treasuries vs. Average Hourly Earnings in the USA

One thing driving the Federal Reserve and the bond market crazy is the whacky disconnect between U.S. wages (AHE in white above) and the global economy’s downward pressure on bond yields (see the U.S. 10 year yield in yellow above). Bonds are in rally mode with lower yields in part because of a large supply of workers, U.S. labor force slack. There are far too many young people NOT in the labor force to generate sustainable inflation. Friday, the unemployment rate rose to 3.9% from 3.7% because the labor force increased by 419k. That’s real size slack* coming back into the labor force. Per OECD data, the U.S. labor force of 25-54-year-olds is down one million (80m to 79m) workers over the last decade, but the U.S. population is 26m larger. A colossal impact on the bond market is baked inside this data. Pick up our latest report here.

“Particularly with the muted inflation readings that we’ve seen coming in, we will be patient as we watch to see how the economy evolves.”

*This does confirm a long-held belief that the U.S. economy during the 2008-2016 period of economic “secular stagnation” pushed far too many (young) eligible workers off to the sidelines. As such, the available (real world) labor “slack” remains much more plentiful than the headline unemployment rate reflects. (We believe Fed Chair Powell has commenced using this slack to justify a softer policy path). Note in December, the labor force participation rate rose above 63.1% for the first time since 2013! Bottom line, look at the whole picture, NOT the unemployment rate when trading gold, bonds, and interest rate sensitive equities.

The Great Powell Balance Sheet Cave In – The Words that Moved Markets – Nasdaq up 4.3% on Friday

Fed Chair Powell on their Current Balance Sheet Reduction at $50B a Month:

“I don’t see us changing that”

“We wouldn’t hesitate to change balance sheet policy if needed.”

January 4, 2019, Event with Yellen and Bernanke

“We should NOT take any further action on interest rates until these issues are resolved for better or for worse.”

Kaplan’s comments were especially important NOT because of the content, but because of his substantial shift in tone since just last October.

“Another two to three interest rate increases from the Federal Reserve will likely put U.S. borrowing costs in “neutral” territory where it is neither stimulating nor restricting economic growth”

The combination of rate hikes and balance sheet reductions from the Federal Reserve in 2018 sucked up global U.S. dollar liquidity and put emerging markets under immense pressure. Next, the collateral damage forged onto the global economy took U.S. stocks lower in Q4. In our view, so far the Fed’s $400B balance sheet reduction vacuumed $1T out of the banking system. Through 2018, foreign banks – size holders of excess reserves – have been forced to search for other funding sources. The unintended consequences here are all over the floor. Globally, borrowing costs for consumers have surged with short term money market yields. The economic destruction is far more than meets the eye, the Fed is clearly walking in the dark here and they can’t find the light switch. 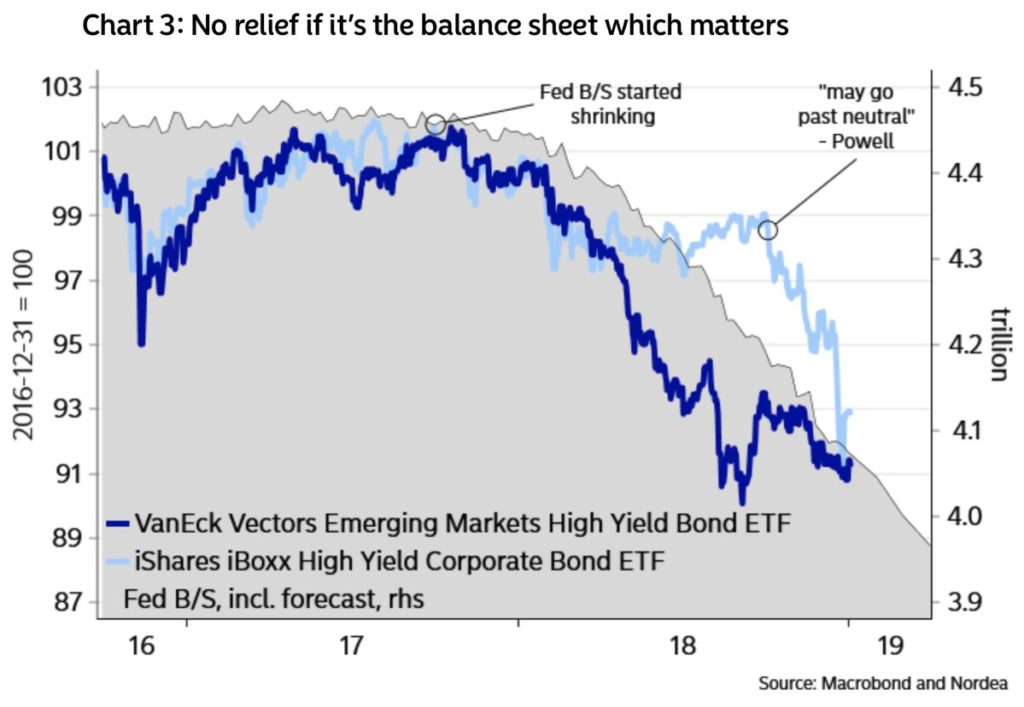 Emerging market equities were 20-30% lower from February through October, bonds (credit markets) didn’t fare much better (see above), next the S&P played catch up to the downside. This, combined with tariffs from the White House has placed global manufacturing in a significant slowdown that has begun to circle back into the United States. After all, over $60T of global GDP is OUTSIDE the USA. 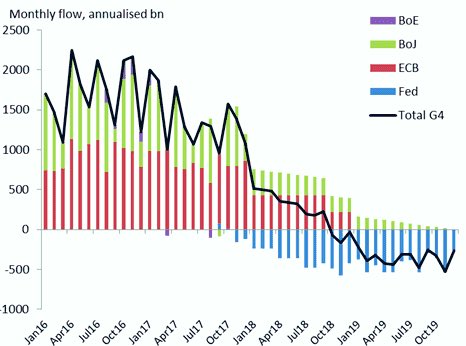 Next, The Mester Cave

Loretta Mester is considered one of the most hawkish Fed governors. It’s very important to watch for shifts from the extreme wings inside the Fed. When a hawk shifts to a more dovish posture, it means far more than a Fed dove repeating a long-held view.

*FED POLICY ISN’T AIMED TO PUT PEOPLE OUT OF WORK

“We should take our time and assess. We may be where we need to be (need to stop hiking rates).”

(Our Larry McDonald had dinner with Loretta Mester in October, spoke to her personally, “one-on-one” for 15 minutes, this is a far different perspective from her in our view, with a meaningful impact on markets).

The market is giving the Fed the “Rodney Dangerfield, “No Respect.” The Fed’s ability to hike rates further in 2019 is in doubt above. Not only are U.S. 2 year yields BELOW the upper bound of the Fed Funds rate, but this week futures were pricing in a higher probability of a rate cut than a rate hike in 2019.

GDX Gold Miners – Simple Way to Bet Against the Fed

There are a number of ways to bet against Fed rate hikes, most efficient is trading EuroDollar futures. One of our best trade ideas issued to clients in the fourth quarter of 2018 was buying Gold and Silver miners. In our view, precious metals are powerful tools to take advantage of a Fed that has been too hawkish. Since October 1st, the probability of ANY Federal Reserve hike has completely caved. Meanwhile, since August, the GDX gold miners ETF is up +23.1% while the SIL Silver Miners ETF is +15.2% higher with the S&P 500 off nearly 15%. Pick up our latest report here.

One thought on “Fed Cave-athon Driving Stocks Higher for Now”