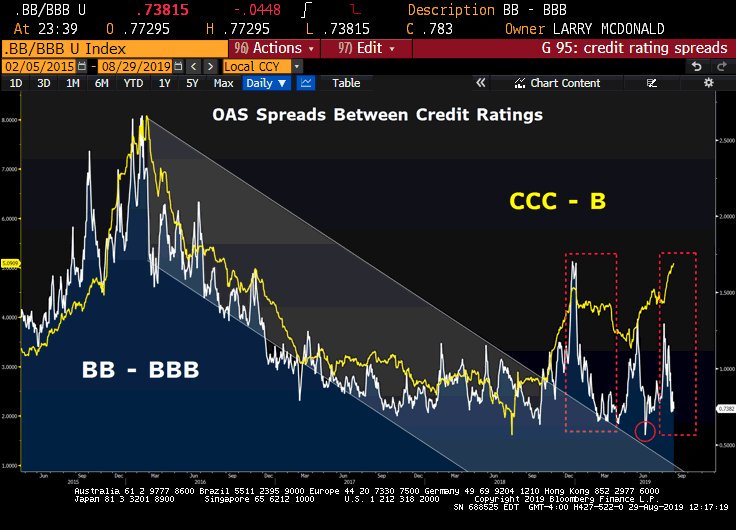 *over 90% of the NYSE stock trading volume is in Down vs Up stocks.

Over 90% of volume went into Down vs. Up stocks on Wednesday, while the overall advance/decline was down nearly 5:1 with 8 sectors falling more than 2% with energy and financials leading the way lower.

*This time only took 9 days

The 2s 10s US yield curve spread inverted for the first time since mid-2007 on Tuesday. Despite many other areas of the curve having inverted earlier this year (3-month / 10-year for example), the widely followed 2s / 10s curve had the media’s attention throughout the day and helped contribute to the significant equity sell-off. When coupled with slowing global growth and rising geopolitical tensions, markets ran-away in fear, from this classic recession indicator.

Since the beginning of the month there has been significant flattening across the curve as long-end yields have continued to fall. Notably, the 3-month / 10-year spread has been pushed further into inversion, down to -37bps (the spread first went inverted in late March this year). Although the 2s / 10s curve is more commonly followed among retail investors, the 3-month / 10-year has significant importance of its own. The spread is the sole variable in the calculation of the monthly New York Federal Reserve’s Recession Probability Indicator. Importantly, the last print of the recession-probability was used the morning of the Federal Reserve’s  latest meeting and completely missed all of the flattening and inversion that has occurred in recent weeks!

NY Fed Probability of Recession in Next 12 Months

The latest recession-probability print showed a decrease from the month prior to 31.48%, driven by the steepening in the 3-month / 10-year yield curve spread throughout July.  However, the NY Fed’s latest recession probability does not include the significant flattening seen in recent weeks. It missed out on the Fed’s recent meeting where markets reacted hawkishly, Trump’s tariff threat for September 1st, the Yuan 7-handle break, and the recent inversion!

Many experienced investors would likely say the 2s / 10s yield curve spread falling just 3-5 bps on the day would not have any significant implications for equity markets. However, the S&P 500 closed lower -2.96% on the day. Of course, this was not completely driven by the inversion-scare but it is hard to deny the negative psychological effects.

In our view, when the updated recession probability prints in the first few days of September, it will have a similar psychological impact. Keep in mind, this is coming from the New York Federal Reserve,  a rising probability points directly to more rapid rate-cuts out of the FOMC.

Based on the 3-month / 10-year spread, the New York Fed’s probability is just under 40%, if we see even more steepening look for a probability pushing 50% and a significant market impact in rates, equities, the US Dollar, gold, and eurodollar futures.