In our view, just 30 counties will determine the next President of the U.S., memories of 2016 indeed. If you look closely, the U.S. dollar’s labor market sensitivity in these key regions is the most compelling development of all. This unique data offers a “looking glass” into the 2020 election outcome. With our partners at ACG Analytics in Washington, we’re spending a lot of time focused on the most revealing inputs and locations across the United States. Four years ago we made some important discoveries for clients pointing to a Trump upset win. Today, we’re looking to add alpha down a path less traveled. Let’s explore.

What’s the True Price of a Strong Dollar?

Like a loud vacuum, a strong dollar sucks important U.S. manufacturing jobs overseas. Votes in all-important States with the most significant election-outcome influence are on the line. This is a major problem for the White House and it’s receiving substantial attention around the halls of the West Wing we’re told. The higher greenback raises the price tag of U.S. manufactured goods around the world. In response, President Trump desperately wants a softer USD, and he will do just about anything to get it.

In an attempt to support the Eurozone economy, since 2014 the European Central Bank has expanded its balance sheet by $2.7T and kept its deposit facility rate between -0.20% and -0.50%, suppressing the Euro currency. If there was a score for cheating on the global trade playing field, ECB chair Mario Draghi has a perfect “10”. Over the same time period, the Fed hiked interest rates 9x and reduced its balance sheet by $600B, per Bloomberg (since this clear policy error, the Fed has recently expanded its balance sheet by $200B and cut the Fed funds rate upper bound from 2.50% to 2.00%). This bizarre policy divergence between the Fed and ECB has empowered the global wrecking ball that has become the U.S. dollar. Trump’s bid to stay in the White House hangs in the balance.

U.S. Election Risk and the Dollar

As we look down the road ahead, this factor is forging significant macro-risk. A sharp blade hangs over markets. Day after day, asset managers are asking us more and more questions. “It’s like Argentina on roids. The candidates are just as far apart, but the possible wealth destruction in the United States with an incoming left-wing government – after Trump fueled bull-market is unimaginable”, our Larry McDonald told an audience at a conference in Latin-America last week. Enormous tails indeed. Unlike previous U.S. elections, the risk-dynamics for investors are LARGE given the colossal spread between market-friendly and un-friendly candidates in 2020. We must keep a trained eye on these developments. In our view, U.S. stocks could fall more than 40% if the probability of a – Warren, Sanders, Harris – election win starts to rise meaningfully. Watch the U.S. Dollar, here’s why.

President Trump pulled off a historic 2016 Electoral College upset with a 304 to 227 margin of victory. There are a total of 538 votes in the Electoral College and a candidate must win a simple majority (270) of those votes to win the election.

*That’s 64 total electoral votes in these all-important States, Trump pulled off an inside straight, winning MI, WI, and PA by just 77,744 votes (per NYT, Wiki data).

Into 2020, the Greenback is Wearing Outsized Risk Factors

In Q3, the U.S. Dollar’s surge to its October 1st peak of 99.67 (97.28 today) did some serious damage to manufacturing jobs in MI, WI, and PA (see the image below). This places TRUMP in a meaningful risk position, far more than U.S. equities are currently pricing-in. If you do the math, Trump CANNOT win these states in 2020 with a strong dollar. U.S. equities are at grave risk unless the White House / Fed can get the greenback down, and down fast. 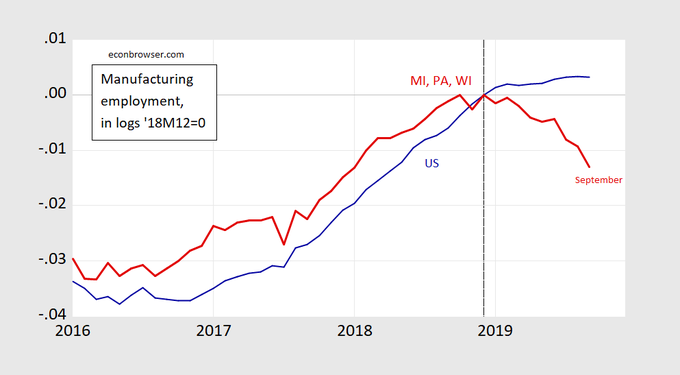 Similar to 2015-2016, this year as the dollar soared, U.S. export products to other countries became far more expensive and manufacturing jobs in Michigan, Wisconsin, and Pennsylvania plunged.

Trump Tweets and the Dollar 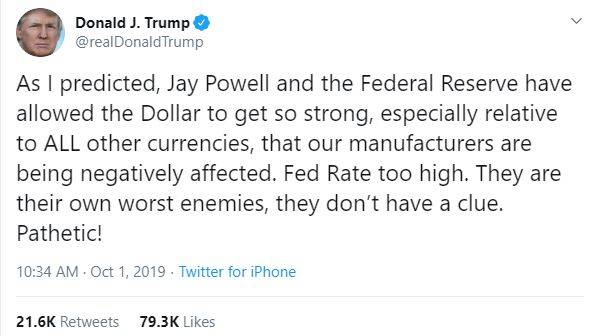 In August, Trump tweeted yet another message of worry focused at Federal Reserve Chair Jerome Powell. That included yet another mention of how strong the dollar is, with Trump saying “highest Dollar in US History.” It was the latest entry in Trump’s crusade for a weaker dollar, which he says will give the US a leg up in the ongoing global trade war. He’s continuously lashed out at the Fed and Powell (see October 1, 2019, above) as the reasons for the greenback’s strength. 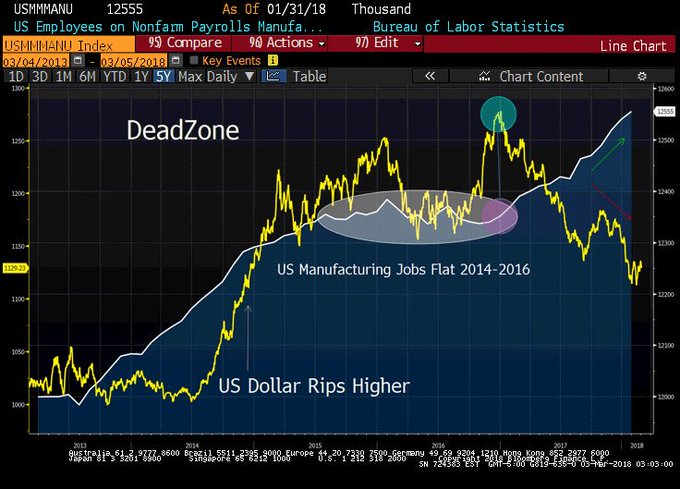 After the 2015-2016 US Dollar surge, manufacturing jobs in the U.S. came under serious pressure. We believe this factor, among others, cost Hillary Clinton the election. Heading into 2020, there are few things Treasury Secretary Steven Mnuchin and of President Donald Trump want more than a weaker Dollar.  It’s probably not too much of a stretch to say that the Dollar’s 2014-2016 surge delivered Michigan, Wisconsin, and Pennsylvania to Trump on the back of undermined manufacturing and exports (see the above image, Dead Zone). The President clearly knows this and it’s part of the reason for his regular tweets and comments lamenting Powell’s interest rate 2018 rate hikes and the strong USD. Stay tuned.

There’s is one very large bright spot for Trump coming out of the labor market. Roughly 5 million more Americans are employed today relative to November 2016.

“Are you better off today than you were four years ago?”

In the final week of the 1980 presidential campaign between Democratic President Jimmy Carter and Republican nominee Ronald Reagan, the two candidates held their only debate. Going into the Oct. 28 event, Carter had managed to turn a dismal summer into a close race for a second term. And then, during the debate, Reagan posed what has become one of the most important campaign questions of all time: “Are you better off today than you were four years ago?” Carter’s answer was a resounding “NO,” and in the final, crucial days of the campaign, his numbers tanked. On Election Day, Reagan won a huge popular vote and electoral victory. The “better off” question has been with us ever since. Its simple common sense makes it a great way to think about elections. And yet the answers are rarely simple.

This morning WeWork junk bonds touched a 13% yield, earlier this year the brain trusts on Wall St. talked up a possible $60B valuation. Then, SoftBank purchased private shares, completed in connection with a $5B primary investment into WeWork that valued the company at $47B, more than double its previous valuation, according to Pitchbook. Today, the equity is near worthless, oh how quickly sentiment can change.  That’s the problem with leverage – when equity stands behind a colossal pile of debt, it can evaporate far faster than most realize. SoftBank better pull-out the checkbook, $10B of fresh cash is needed. In our view, WeWork has the capacity to issue a little more than $1B in secured debt and $2.56B of unsecured debt. This is substantially less than some of the estimates floating out there regarding potential loan commitments., working with Xtract Research on the numbers. Above all, we must think about the follow-on side effects in today’s equity market. These events are harbingers of things to come in our view. A meaningful re-pricing is in the works.

“If the company is unable to raise new financing before the end of November, the people said it could face something that executives within WeWork never thought was an option just weeks ago: bankruptcy.” – FT

We must ask ourselves. After wide-open capital markets, an endless gravy train of nearly free cash, are the side effects in venture capital playing out? How can WeWork eviscerate $50B of equity value in less than six months? What are the follow-on implications? Postmates, Lyft, DoorDash, WeWork, Peloton, Uber, and Casper will lose nearly $15B this year. A near-endless supply of cash is needed to fund many of these businesses. The financial media’s story of the year is WeWork’s implosion. The larger narrative will be found in SoftBank’s Vision Funds impairment – if the market isn’t there for them, they will have to fill the capital hole.

A Wave of Sellers

The restricted shares from the respective IPOs of Zoom Communications (ZM) and Pinterest (PINS) were ‘unlocked’ on Tuesday. Both stocks are lower despite over a 1% rally in the S&P 500. ZM is down -2.6% while PINS is down -4.4%, both are on-track for their largest volume days in months. In our view, this shows across the IPO space, there is a herd of restricted-shares just waiting to sell. See below for the restricted share expiration schedule… 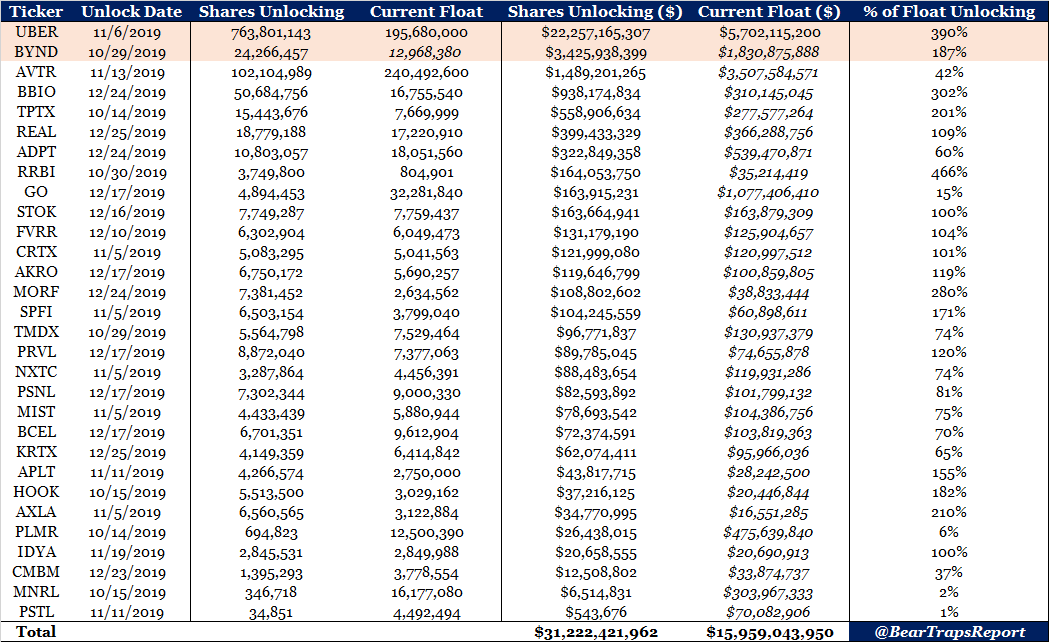 Out of the $31.2B of restricted IPO shares becoming unlocked from now until the end of the year UBER is 71% of the total. ($22B vs. $31B). However, what is very interesting is the amount unlocking relative to the current float…While most unlock packages are smaller than the current float or near a 1:1 ratio, UBER’s is 4x the size! UBER float is currently 195M shares and worth $7.4B. Meanwhile, 764M shares worth $22.3B of UBER are unlocking on November 6th… That means up to 424% of the current float could be for sale.

WeWork Contagion and a Lyft Benefit:

Given what just happened to WeWork and the performance of LYFT and UBER IPOs, you have to think a large portion of the $22B unlocking wants out… Meanwhile, some clients are thinking this will be a positive for Lyft, as the company was used as a hedge for restricted shareholders…

UBER Currently has a $49B Valuation

The series G funding round was at a $68B valuation in 2016, (FortRoss Ventures, Saudi Arabia’s Public Investment Fund). In August 2018, Toyota Motor Company came in with a $500M investment at a $76B valuation… Last man on the deal team?

Notably, Lyft is down -42% since they announced the early unlocking of their restricted shares. Although the increase in float does not directly influence the valuation, it does bring a herd of likely-sellers.

Ridesharing companies LYFT, and UBER don’t have a moat in our view. It’s like “Chinese capitalism” (that funnels lots of profits to consumers, thus poor performance in the company’s stock prices). It’s a subsidy of consumers (Uber riders) at the expense of Uber shareholders and Uber Drivers.