No One is Doing the Math

There is nearly $200T more debt on earth today relative to the days of Paul Volcker – so why does much of Wall St. constantly compare Fed Chair Jay Powell to central bankers from an entirely less levered era?

The Fed and their collection of well-placed pawns keep lecturing us on their policy path filled with endless rate hikes to fight inflation  – but the math tells us the sales pitch is all bs.

Three Things You Need to Know

1. The income that the Federal reserve generates comes almost exclusively from their $8.8Tr portfolio of Treasuries and agency MBS. The Fed transfers that interest income to the Federal government, and this has been a nice source of income that supports Washington DC deficit spending. However, the interest income the Fed generates is reduced by the interest it pays the commercial banks for their excess reserves. The Fed likes to call these “interest to depository institutions”. Last year this interest rate was still a paltry 0.15% but as it is directly linked to the Fed funds rate, it has since risen to 2.4%. So the interest income the Fed earns is the sum of the money it makes on the QE assets minus the money it pays the banks for their $3Tr in excess reserves.

The Backstory goes all the Way to Lehman Brothers

Fourteen years ago this week – Lehman Brothers failed. How is this colossal financial collapse, tied into the road ahead? After the Great Financial Crisis – our brain trusts in Washington wanted to make sure the U.S. financial system would never again succumb to the double-edged sword of excess leverage. Regulators forced U.S. banks to “reserve up” and so – for the last 14 years – Wall St.’s financial epicenter stored an ever-enormous dollar number of reserves – mostly found in U.S. Treasuries.  Today, as promised the Fed must pay these banks MORE and MORE interest on these reserves. As the central bank hikes rates – the unintended consequences are MOUNTING along with a political backlash – potentially louder than a Donald Trump appearance on “The View.” This time next year, the Federal Government is looking at a near $400B negative swing; a) from profit to a loss on the Fed´s transfer of net interest income – triggered by a surge in interest payments to banks on reserves, b) plus $200B additional interest on their $31T debt load. Dollar headwinds are mounting from; emerging market credit risk, China currency devaluation, the Eurozone energy crisis, a weaker U.S. consumer (see Capital One CDS, the cost of default protection is on the rise), and one-year inflation expectations crashing at the fastest pace since the fall of Lehman Brothers. Sit back, think of taking the Fed Funds rate from 25bps in March to 325bps this month, that´s three years of accommodation withdrawal in just six months. The Fed is very close to table max, the risks that they have over-cooked the goose are sky high.

2. Keep in mind, that the Federal government pays interest on its now $31Tr  in debt. This interest is going up, as low-yielding securities are maturing and the newly issued paper has a higher interest rate. So while the Fed’s interest income is going down, as the portfolio shrinks (QT) the interest they pay (IOER) is going up. Sometime in the next year, the Fed will start generating losses, as IOER starts to exceed QE income. Meanwhile, Washington DC is spending more money servicing its debt as interest rates increase. 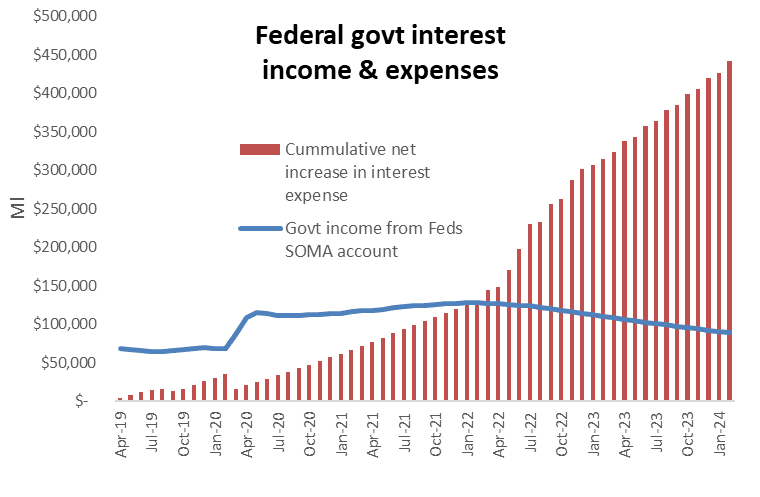 In the chart, we show how this works. The blue line shows the income from the Fed’s QE portfolio and compares it to the cumulative increase in interest expenses, from both higher interest on the government’s debt and the Fed’s payments of interest on excess reserves (IOER). This shows the $400bl negative swing next year in government income due to the deterioration in net interest income.

3. The data demonstrates how the government will incur a negative swing of more than $400bl in the next year just from interest payments and income.