The recent sell offs in the S&P 500 and U.S. Treasury markets have been tied to a narrative of increased inflation and rising interest rates.

The inflation concerns have been supported by a few surprise data-beats. Today’s ISM Non-Manufacturing Index beat the consensus of 56.2, printing a much-higher than expected 59.9. Last week, non-farm payrolls of 200k beat consensus of 160k. Also, the long-awaited increase in wages may be starting; average hourly earnings (YoY) was higher, 2.9% vs. 2.6% exp. Wednesday’s Chicago PMI came in modestly above consensus at 65.7 vs. 64.

While ISM’s measure of prices paid increased to the highest level since May 2011 (keep in mind, U.S. 10 year bond yields were up near 3.50% in the Spring of 2011).  What’s driving all the bearish bond sentiment?  One major reason is found in the “growth to bold yield” disconnect.   For most of the last fifteen years, the U.S. 10 year bond yield was “tied to the hip” of manufacturing ISM prices paid.  In our view – as you can see above – the current level of ISM prices paid should be associated with U.S. Treasury bond yields 60-70bps (+0.60% to +0.70%) higher than current levels.  In recent years as inflation expectations plunged, the disconnect between ISM and 10s (Treasury bonds) widened.  Over the last month, as inflation expectations surged, these two long lost friends are spending far more time together.

Is increasing wage growth (finally) here? Above, Friday’s average hourly earnings beat expectations; showing 2.9% vs. the 2.6% expected. The 8:30am data release was a catalyst for the day’s bloody sell off in both bonds and stocks. The DJIA finished 666 points off; the U.S. bond selling rattled the global markets, prompting additional declines in nearly all major global indices since. Previously included in “Regime Change” .

In addition to the data, there are supply and demand dynamics that should continue to put upward pressure on rates in 2018. The deficit is growing (at an increasing rate), and the Fed and ECB are both, for now, on course with their respective selling and decreased buying.

The mechanics of this paradigm shift in the bond market are not new, however. Most have been covered in past blog posts. The underlying symptoms have been untreated for quite some time, and the risk of an inflation-driven interest rate shock is still growing, according to some of the most powerful finance executives.

Finance Chiefs at Davos: “Can We Have a Soft Landing?”

One commonality in the commentary and speeches from this year’s World Economic Forum in Davos, Switzerland, was the globally-present susceptibility to an interest rate shock. Among the list of speakers to reference this apparent systemic risk was Axel Weber, of UBS, Benoît Cœuré, a member of the European Central Bank’s executive board, Ray Dalio, Bridgewater founder, and Min Zhu, the former deputy chief of the IMF and the People’s Bank of China.

Mr. Weber, chairman of UBS and former leader of the Bundesbank, tips his hat to the central banks that have found themselves nearly 10 years into an unprecedented stimulus policy that they do not understand – an experiment with the potential to cause a sharp repricing among all asset classes globally.

According to Weber, the way monetary policy boosted the economy was through the wealth effect; by creating an environment of rising asset prices, in stocks, bonds, and real estate. This growth has been due to, and remains dependent on, low interest rates.

“At some point the inflection point will come,” he said. And when it does come, central banks will have significant challenges providing the same accommodative policy and pulling the same liquidity levers in the new political landscape.

Ray Dalio noted that the sensitivity to interest rate change is greater than before; “it is very high.” A surprise rise in back-end rates, even modestly, at this point in the aging cycle, could be the detriment to a market now reliant on high-duration bonds. It could abruptly end the party, and reprice all assets, generating trillions in losses.

He feels that post-QE and post-Tax Reform, the U.S. was already at capacity and near overheating, and now the weaker dollar adds “stimulus on stimulus.” When the global expansion begins to tire, the exhaustion of monetary and fiscal stimulus options leaves the system as we know it more fragile than before. If anything goes wrong, “It won’t be a pretty picture.”

On May 22, 2013, the Federal Reserve announced that it would begin tapering back their roughly $70 billion a month in bond and mortgage-backed securities program.  A series of positive economic developments in the spring of 2013 led Federal Reserve Chairman Ben Bernanke to testify to Congress on May 22, 2013, that the Fed would likely start slowing— tapering—the pace of its bond purchases later in the year, conditional upon continuing good economic news.   Similar to this week’s price action in markets, bond yields surged with equity market volatility as investors exited stocks and bonds together.

In recent years as volatility surged, long bonds (U.S. Treasuries) rallied with lower yields. Today, we’re in the early innings of a secular change in this regard, bond yields are moving HIGHER with the VIX, wow.  We have a special report on bonds and our trading thesis for 2018, pick it up here.  Previously included in “Regime Change”

Stagflation, or Simultaneous Sell Offs in Stocks and Bonds

The market is coping with this newfound focus on inflation in its own way— by selling off equities and treasuries. To those who joined the markets in the 21st century, this may seem to be a glitch on the screen, if the S&P falls (an increasingly rare occurrence), USTs should catch a bid, sending yields lower. But a look back to the 1970s and 80s shows us that in times when inflation concerns were higher, stocks and bonds both used to sell off in tandem.


“We believe inflation is set to finally pick up in 2018. Much of the passive and quant-side (a $1.5T shift in asset management) has become heavily invested in the “risk parity” model which involves being long equities and bonds on a risk-adjusted basis. One of the fundamental problems with this strategy is you’re effectively really long disinflation.  Sure, it’s worked very well in the post great financial crisis period, but it’s a grossly crowded trade and has all the makings of a gruesome slaughterhouse.   In this case, the risk tail is a period where equities and bonds fall together, which is not that uncommon in a late cycle inflationary environment (see 1980s and 1990s). Other than out of the money puts in rates (bonds) a big way for these guys to hedge inflation is to increase commodity exposure.  As long-time bulls, we’re now ‘pounding the table’ bond bears for 2018.”

The Long Bond, on a Key Technical Level

The US 10 year has already broken the trend line above.  Fed policy, strong global growth and the new kid on the block, US fiscal policy have driven the latest round of selling.  Pick up our latest Bear Traps Report for our detailed investment thesis of 2018. 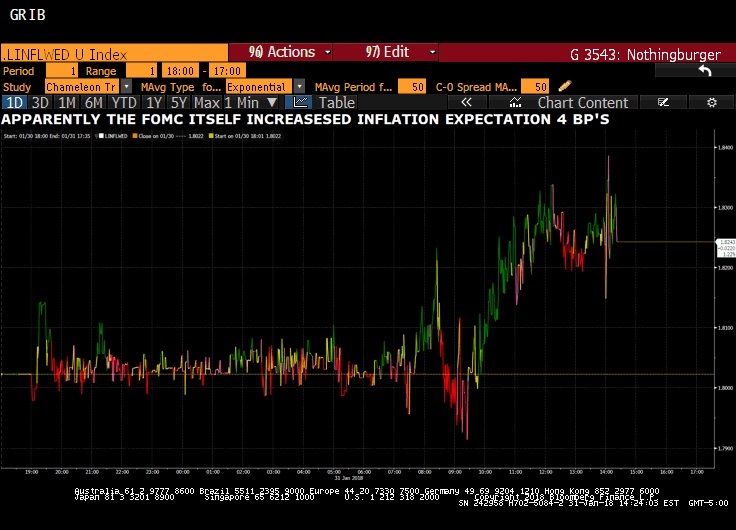 The big news of the day (see above) came when the Fed raised near-term inflation outlook to above two percent, driving the two-year bond yield even higher, while the long end (30s) rallied, thus more flattening.

The probability of rate hikes in 2019 has doubled since the last FOMC meeting:

The thing to keep your eye on, in our opinion, is the probability of four hikes in 2018, instead of the three (the recent consensus). The Street was hawkish today before the meeting. Much of the debate comes from the Fed’s word choice on near-term risks to the economic outlook. The Fed reiterates these risks as “roughly balanced,” a nod away from Goldman Sachs’ expectations that these risks would now be just “balanced”. Chair Yellen left today as dovish as she came, and the Street is looking at the Powell team as by definition, more hawkish (more likely to pull back accommodation).


The probability of four or more rate hikes in 2018:

Data-dependent, gradual raising Yellen hands the baton today over to a similarly data-dependent Powell. However, if the data (recently firming prices and slightly higher, yet still sub-2%, PCE) is allowed to speak for itself, it was reasonable to expect a hawkish tone in today’s statement.

Yellen, while ill-advised to act based on market prices has a history of mentioning “rich asset valuations”, and must be keeping her eye on the technically-overbought S&P 500, which, even with this week’s move off the highs, is up 5% YTD, or an annualized rate of 83%. NY Fed President Dudley recently expressed concern about the possibility of an “overheating” economy that appears to be stretching its cycle after the passage of tax reform.