“A cab driver will tell you Tesla is barely profitable. Most know it has a market capitalization similar to that of the world’s leading premium car makers; BMW and Daimler, who made $14B and $18B last year, respectively. The company has burned through $13B of capital over the last decade, yet it trades at 3x BMW and 7x Porsche EV/EBITDA multiple. Tesla has thrived, in large part due to ubiquitous subsidies as well as wide open capital markets. Thanks to obnoxiously accommodative central banks, an easy money gravy train has allowed this levered beast to issue more than $11B in high yield and convertible debt in the last few years. Bottom line, in a normally functioning business cycle (capital market formation) without central bank interference, the company would NOT exist in its present form. With over $750B of U.S. high yield and investment grade (leveraged loans) bond maturities in 2019 and a Fed reducing its balance sheet (QT) to the tune of $50B a month – tightening financial conditions will be the noose around Tesla’s neck.”

Washington Policy Will be Driving the Tesla Bus in 2019

Tesla’s best friend over the past decade has been the U.S. Government and  Elon’s (Musk) beloved tax credits for manufacturing electric vehicles. In 2009,  President Obama signed the American Clean Energy and Security Act, stipulating that EVs produced after 2010 were eligible for a tax credit up to $7,500. In his 2011 State of the Union address, he pledged $2.4B in federal grants to support the development of next-generation electric vehicles and batteries.

In January, we released a major theme-report on the Electric Vehicle industry and Tesla, find out more here.

The End of Subsidies?

These tax credits were designed to have a time limit – a financial benefit (to Tesla) acting as a melting ice cube. Per the plan, after manufacturers hit the 200,000 Electric Vehicles sold mark, their tax credits would begin to phase out. Tesla was the first manufacturer to enter the phase-out at the beginning of this year, while General Motor’s phase-out began on April 1st.

“The fate of efforts to extend the electric vehicle tax credit are most likely tied to the fate of tax extenders legislation—legislation which is very much in doubt because of divisions among House Democrats, which include, among other disagreements, whether to offset the cost of reauthorizing expired or expiring tax credits (so-called “tax extenders” legislation). The Senate Finance Committee, under the leadership of Chairman Chuck Grassley (R-IA) is less inclined to offset the costs of the tax legislation.”

Tesla stock price is on the bottom end of a sustained trend channel, as investor’s optimism slowly dwindles. However, “proposed” legislation could be the boost the equity needs to bounce off nearby support – as long as it moves quickly trhough Congress.

Pick up our latest report on Electric Vehicles here:

This week our associates in Washington have a very insightful update. In an institutional research note, ACG Analytics made the point that new legislation has been introduced with bi-partisan support for extending the tax credit wall an additional 400,000 vehicles with a slightly smaller credit of $7,000. We have an important view on the likelihood of legislation passage here, see our full report here. 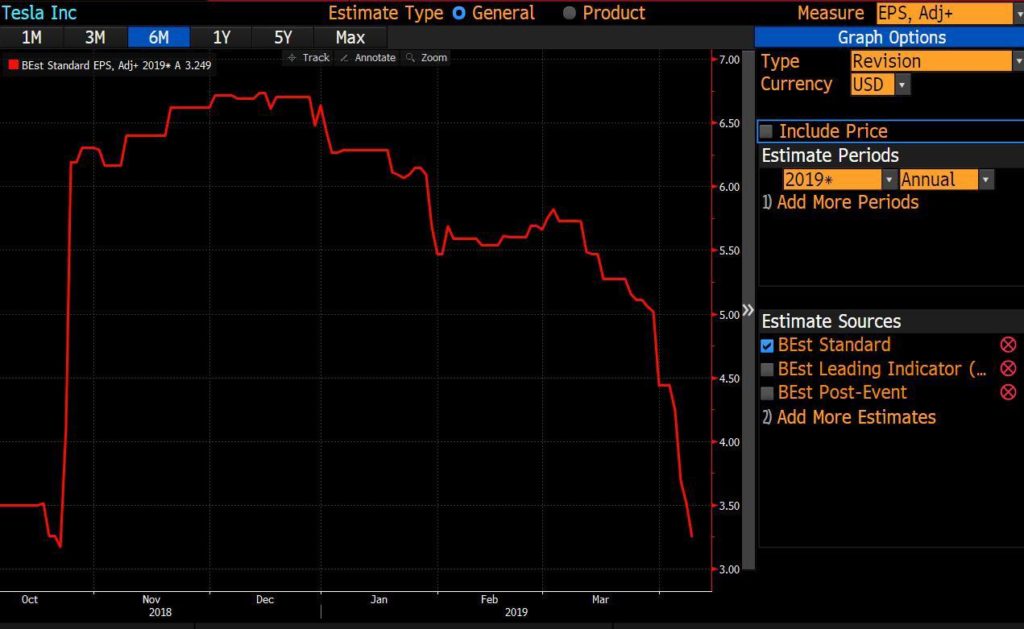 This year’s earnings expectations for Tesla have crashed down from their fantasy levels. At the beginning of the year EPS expectations were over $6.00 for the year, now they have fallen over 40% to near $3.25. Expectations slid due to increased competition in Europe and the company not hitting bullish delivery estimates – the loss of tax credit did not help their bottom line.

If the “proposed” legislation were to quickly* pass through Congress and is signed by the President, it could have large benefits for Tesla’s equity as the stock price has reflected the reality that their customers were no longer receiving thousands per vehicle from the U.S. Government.

Across the street, estimates were cut after disappointing Quarter 1 deliveries. We believe Tesla should deliver roughly 339,000 vehicles by year-end (~77k thus far). Back in January, some Street estimates were as high as 400,000. However, this would leave them with limited tax-credit-worthy vehicles IF successful legislation is delayed until the end of 2019 or beyond.

Keep in mind – almost all of Tesla’s competitors will be able to reap the benefits of these tax credits for years to come. We wrote about Tesla’s incoming supply problem back in January’s bear case.

“In the mass market, Tesla’s model 3 will face an avalanche of competition from Nissan, VW, GM, the Koreans, and the French. In this table, we only highlighted the most significant launches for the US market, which is 50% of Tesla sales.”

In October of 2018, Tesla reported another rare profit. After 8 quarters of mounting losses, shorts were once again caught on the wrong foot (as you can see above – red circle). Why the sudden turnaround? Unlike almost any other mass car producer, Tesla delivers from their order book. With Model 3 production (finally) at adequate levels, Tesla first started delivering the top range Model 3s, which often go for ~$55K vs a $35K base price. To exemplify, Tesla makes an estimated $3,500 operating profit on the $45K version while it loses some $3,900 on the base Model 3. This is how Tesla showed a rare profit in Q3. Keep in mind, Tesla didn’t just turn profitable, it also showed positive cash flow – or more pain for shorts. This was mainly due to reversals in working capital and tax credits. All this came as huge surprise to the market and the stock ripped higher, as short sellers once again rushed to cover. We MUST look at the Tesla credit (5.3s due 2025). In late October / early November as the stock soared, Tesla’s junk bonds were NOT buying the price action in the equity and lost 4 points (early November to late December)! Sure enough, a few weeks later the stock caught up with the bonds on the downside.

Let us know if you are interested in the detail behind the potential legislation – email tatiana@thebeartrapsreport.com .