Today, the crowding in US Dollar assets is the antithesis of the emerging market lovefest circa 2006-7. Prior to the Great Financial Crisis, investors were flooding into emerging markets as US data began to deteriorate, leading EM being perceived as a safe-haven. “They’re building 100 Chicago’s in China don’t you know?” The consensus view was emerging markets had ‘decoupled’ from the US. EM bulls touted that neither Bear Stearns’ collapse nor the struggling and over-levered Lehman Brothers mattered — emerging markets were the ‘safe place’. High kites indeed, last 10 years the S&P is up 267% vs. the iShares China Large-Cap ETF’s paltry 31% for the on a total return basis. However, once the US-born recession washed-over on emerging market shores, the flood of foreign capital rushing back into the US Dollar was colossal. In our view, the opposite dynamic is playing out today. A global trade triggered slowdown is causing investors to hide out in US assets (S&P 500, Treasuries, USD). We believe a capital flood out of the US is on our doorstep.

*Nine Fed rate hikes and $500B balance sheet reduction also had a ton to do with the 2018-19 dollar surge, inflicting pain across a world with over $50T of dollar-denominated debt. Remember, there’s $62T of GDP outside the USA, $18T inside. The Fed essentially blew up the global economy twice in 2016 and 2018 with an aggressive policy path. They’re attrrocious risk managers.

US Economic Risks Catching Up with the Rest of the World?

We’ve been told time and time again that “late cycle” dollar moves have historically shown strength in the face of adversity — see 2008. Most people forget trillions of US Dollars were hiding out in “decoupled” emerging markets prior to the Great Financial Crisis. A decade ago, thanks to toxic risk assets in the US banking system, investing outside the country in emerging markets was literally considered the “safe haven”.

A decade later, we all know now the decoupling myth didn’t hold. In 2008, capital began flocking back to the USA once the crisis oozed around the world and global economic risks surged. On the other hand, the 2016-19 period has been loaded with global economic risks: currency devaluations, trade worries, and plunging PMIs (purchasing manager indices). As a result, trillions have been hiding out in the USA in technology stocks like the FAANGs (Facebook, Apple, Amazon, Netflix, and Google), passive asset management (over 600 ETFs own FAANG stocks as a top 15% holding), short term US Treasury debt. Downside risks to these assets have surfaced. Today, we’re seeing some major capital outflows from the US — the Dollar is in trouble. Case in point, the yield advantage of short-term US Treasuries (2-year bonds) relative to their German counterparts has moved from 3.55% to 2.55% over the course of the last seven months. From a yield advantage perspective, there are far fewer reasons to hang out in USD.

Elections and the US Dollar 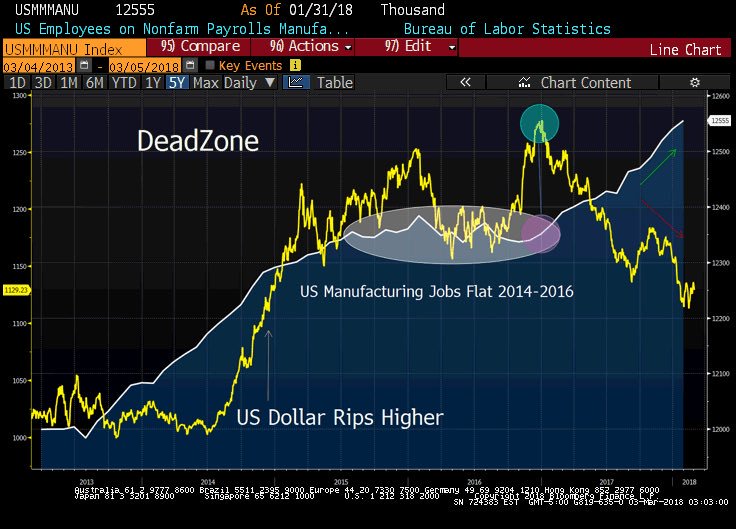 Heading into the 2020 election, there are few things Treasury Secretary Steven Mnuchin, OMB Director Mick Mulvaney, and of course President Donald Trump want more than a weaker Dollar.  It’s probably not too much of a stretch to say that the Dollar’s 2014-2016 surge delivered Michigan, Wisconsin, and Pennsylvania to Trump on the back of undermined manufacturing and exports (see above, DeadZone). The President clearly knows this and it’s part of the reason for his regular tweets and comments lamenting Powell’s interest rate hikes. USD bulls — beware! 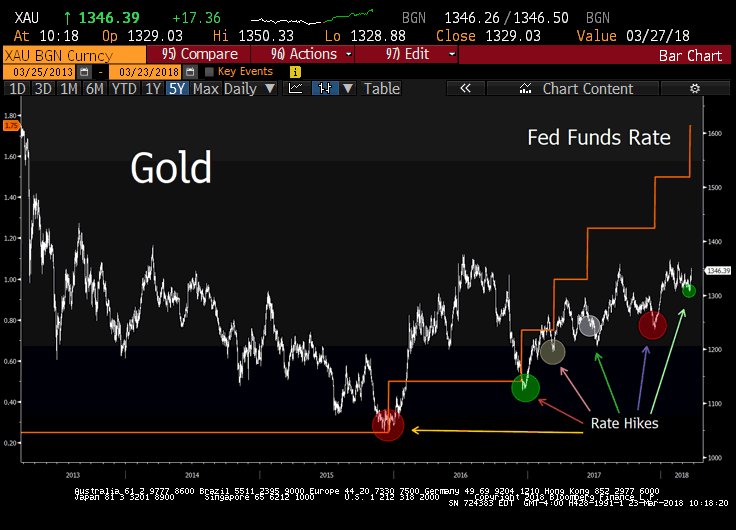 As rate hikes go, gold has plunged into every single one of them since 2015. Today, the investors are obsessed with rate cuts coming down the pike, we’ve come a long way, baby. The probability of a Federal Reserve interest rate cut this June has moved from just 5% to 30% over the course of the past week. Now that investors are anticipating a total 180-degree turnaround from the Fed, precious metals are surging on the prospects of central bank love and accommodation. Thanks, Jay (Jerome Powell, Chairman of the Fed Board of Governors)…

Stimulus in Europe and a Buoyant Euro

One development we see going forward is a US focus on monetary policy due to gridlock in Washington. At the same time, the rest of the world (RoW) is shifting toward the fiscal side. Today, in Europe, we’re seeing Deputy Premier Salvini — de facto the most popular political force in Italy — pushing a flat tax and massive deficit spending despite EU rules. Meanwhile, Germany is likely heading toward a fiscal stimulus package focused on infrastructure to make up for lagging growth in manufacturing and Southern Europe’s economic woes. Recent elections, especially those to the European Parliament — in which populists increased there vote share from 21% to nearly 30% — have shocked European leaders. As Europe’s economic engine, Germany led by Chancellor Angela Merkel is desperate to keep the economy humming along by any means necessary so as to avoid continued populist success at home and across the continent.

Fed and ECB Policy Will Run Gold Wild vs. Stocks 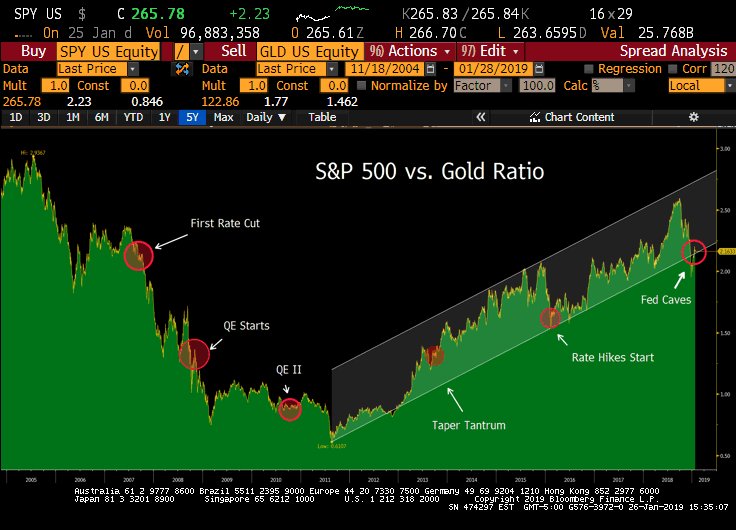 Gold just loves a good Fed cave-a-thon. Take a look above at its remarkable performance against the S&P 500 during rate cutting and hiking cycles. We see more love coming for the gold bulls versus stocks.

Fed monetary policy expectations and fiscal stimulus out of Germany and Italy are clearly a Euro positive and thus yet another USD negative. From a technical analysis standpoint, gold has to get above the $1375 per ounce mark convincingly in order to break the back of its near decade-long bear market. After that, silver junkies will join the party and it all goes hyperbolic. To be continued…