“The crisis engulfing Evergrande, China’s second-biggest property company, is the greatest test yet of President Xi Jinping’s effort to reform the debt-ridden behemoths of the Chinese economy. As angry protesters occupied the headquarters of the troubled property developer in recent weeks, some analysts have described the Evergrande crisis as “China’s Lehman Brothers moment”. Only this time it’s a credit-fuelled housebuilder that suddenly can’t pay its $300bn debts, rather than a blue-chip (Lehman) investment bank that many assumed was too big to fail but was instead thrown to the wolves 13 years ago.” They took Lehman´s head underwater and they watched for the bubbles – but why? 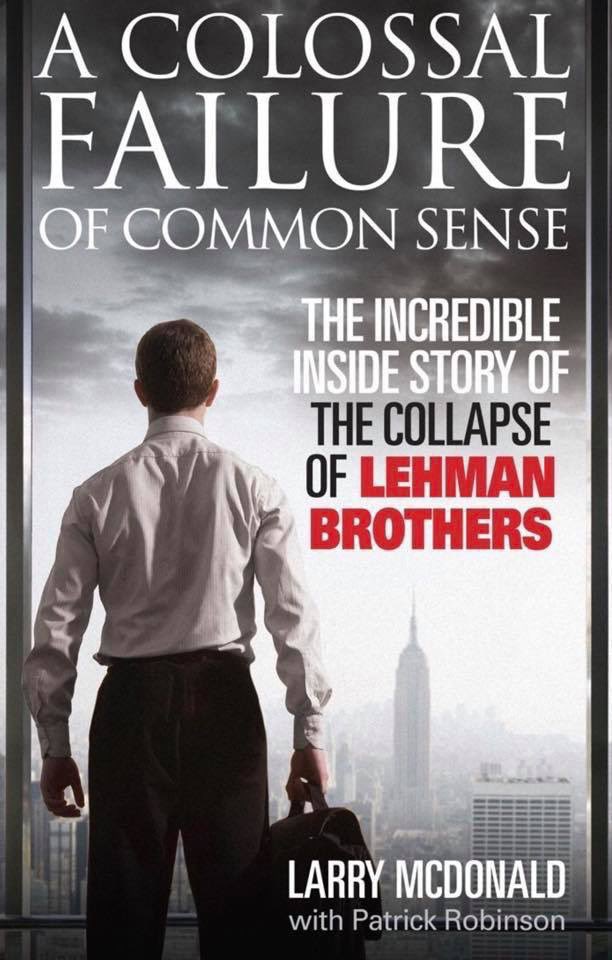 My name is Larry McDonald, that’s our UK book cover above. In the years before the failure of Lehman Brothers, I ran a successful distressed credit business at what was the 4th largest investment bank in the U.S. – becoming one of the most consistently profitable traders in the fixed income division. In late 2008, early 2009 – with Patrick Robinson, we penned “A Colossal Failure of Common Sense” – the Lehman Brothers inside story. At least once a month, I tell my wife while wearing a hopeful smile —“if we sell a million books — we´ll break even on our Lehman stock.” On September 15, 2008 – it all came crashing down in the largest bankruptcy in U.S. history. Known as, “the week that changed the world,” a very painful experience indeed. I was down on the mat looking up at the referee as he delivered the count. It was one of those fateful moments most of us face. Staring into the abyss, drenched in blood-curdling uncertainty, there are times in life when we must get up. Even when it looks like all is lost in a valley of no hope.  Ultimately, the lucky ones learn there are valuable lessons in re-invention. The last 13 years have been a breath of fresh air. Our New York Times bestseller has been published in 12 different languages, the “page-turner” is in the CFA Institute’s top 20 all-time (finance books), and was featured in the Academy Award-winning movie with actor Matt Damon, “Inside Job.” It’s an absolute must-read filled with countless lessons, especially for someone under 35 years of age. Over the last decade, I have been told more than a thousand times – it´s one of the most readable books in finance, ever written. Anyone can enjoy it.

Today – we run one of the largest institutional client chat rooms across the Bloomberg terminal. Since 2010, more than 600 buy-side investors participate, now from 23 different countries. Please reach out to tatiana@thebeartrapsreport.com for more details.

One of the important lessons in our book comes down to – how to use leading credit risk indicators? In the 2007-2010 period, the global credit risk epicenter was obviously inside the US.  In the 2011-2013 period, Europe´s banks were the focus during the Grexit panic. In recent years, Asia has become far more interesting, a new epicenter has been formed.

As far back as the spring of 2007, U.S. banks began to underperform financial institutions in Asia. By now, everyone knows most of the subprime mortgage credit risk was inside the USA with domestic banks more exposed than other banks around the world. Notice above, Goldman Sachs (green above) 5 year CDS (the cost of default protection on the bank), began to meaningfully divergence from Standard Chartered. Standard Chartered PLC is an international banking group operating principally in Asia, Africa, and the Middle East. The company has far more credit risk exposure to China – Asia than U.S. banks. It is clear above, more than 12 months prior to Lehman´s failure, banks in the USA were dramatically underperforming from a credit risk perspective. In other words, in 2007 – the cost of purchasing credit default protection on Goldman Sachs was far more expensive than the bank´s Asian peers. Indeed, elephants leave footprints – when large hedge funds see credit risk – they start placing bets months if NOT years before a credit event. The credit market sniffed out Lehman´s demise months BEFORE equity investors got the joke.

During the 2015-2016 China currency devaluation crisis, CNH volatility was a solid leading indicator while China was hemorrhaging foreign currency reserves. In recent weeks, all has been calm, but in recent days a lot has changed. If an asset manager wants to buy some cheap protection against a credit event in China, one can place a bet against the CNH – Yuan. As capital flows into these kinds of wagers, the cost of currency hedging surges. Hence, CNH vol is on the rise. If there is truly a credit crisis in China, the currency should be a lot lower and the cost of CNH vol should be MUCH higher.

Now, let us think of Asia in the summer of 2015.  The Fed was attempting “liftoff” – their first rate hike since 2004. Finally, in December of 2015, the Fed hiked rates 25bps for the first time in eleven years. In the process, as the central bank prepared the world for the now-infamous rate hike. In just six months the dollar ripped from 80 (July 2014) to 100 (March 2015). Emerging markets were in flames, the Fed had triggered a global dollar crisis. More than $1T left China (the country´s fx reserves were on the run). The world was in a real currency devaluation panic, with Asia wearing the epicenter title this time around.

During 2015, the China currency devaluation crisis picked up steam in September and came to risk climax in Q3. But months before, the cost of default protection on Asia´s Standard Chartered began to sharply diverge (blue above) from Goldman Sachs in the U.S. Once again, credit risk was screaming “there is a problem” in May 2015, by September the S&P 500 lost 16%. In 2007, Goldman’s credit risk was so telling. Then, eight years later – banks in Asia would wear the credit risk epicenter title. Fast forward to 2021, Evergrande headlines are all the media rage, especially with the Lehman, the lucky 13th anniversary this week. But, what are credit markets telling us this time? As you can see above – far right. Credit risk is calm on Asia banks with exposure to China, no difference to speak of. Central bank liquidity is so abundant, there is NO way Lehman would have failed today. Free markets no more. Adam Smith has one (invisible) hand tied behind his back. We have unintended consequences as far as the eye can see with Uncle Sam’s fingerprints on every street corner.

The flood of cash in U.S. interest-rate markets pushed the amount of money that investors are parking at a major central bank facility to yet another all-time high – every day a new high indeed. In recent weeks, EVERY DAY more than Eighty participants have been lining up for nearly $1.2 trillion at the Federal Reserve’s overnight reverse repurchase agreement facility. Large counterparties like money-market funds can place cash with the central bank. This easy money gravy train is hiding the next Lehman Brothers, all embraced in deception. In terms of bond yields, let’s look around the planet. In the U.S., close to 90% of the junk bond market is trading below CPI inflation of 5.3% (highest since the early 90s). Over the last 50 years, the highest this number ever reached was 7%. China’s high yield credit market is just 8-10% away from its March 2020 lows in bond prices – highs in yields. All of which begs the question – How can the U.S.-centric JNK Junk Bond ETF yield 4.4% while China´s junk bonds are offering 10-12% cash flows?! Always with an important lens – our friend, Jens Nordvig reminds us – “foreign involvement is small in China. It is true that the high-yield bond market has a sizable USD component (mostly foreign). But relative to the US, where subprime exposure was sold around the world, it is a much more local (controllable) system.” It has been clear for months, there is Evergrande credit contagion – it’s just inside China at the moment.

Each year that goes by while central banks force investors to reach for yield – any paltry plus return on capital will do these days – complacency builds over time to an extreme – dangerous level.  Mark my words – there were dozens of Bernie Madoffs, Al Dunlaps, and Jeff Skillings sipping mint juleps in the Hamptons and the beaches of the south of France this summer. Central bankers are these guys’ best friends, that is the reality no one wants to admit. As long as central banks do NOT allow the cleansing process of the business cycle to function over longer and longer periods of time – credit risk will continue to build under the surface. Each month, week, and year we allow this charade to move forth – the corners capital flows into are deeper and deeper soaked with moral hazard toxicity. Today´s players on the field make “Dick Fuld” – former Lehman CEO –  look like a choir boy walking out of Sunday mass. The coming event will dwarf what was – “A Colossal Failure of Common Sense.”