A Wall St. Legend Leaves Us with Timeless Lessons

Wall St. lost a legend five years ago this week.  Over the last two decades, Larry McCarthy was probably most respected junk bond trader, a man with fearless resolve.  He was one of a kind and touched so many people in positive ways. The only thing that outshined Larry’s inspiration to others was found in his generosity.

Stories of Larry’s passing have been widely read.  Over the last week, his profile was the most viewed globally across the Bloomberg terminal.  He will be missed by many, the man left a mark.

Authors Patrick Robinson (left), Larry McDonald (right), and Larry McCarthy (middle). “Colossal Failure of Common Sense” is now published in 12 languages, with over 650,000 copies – one of the best-selling business books in the world. 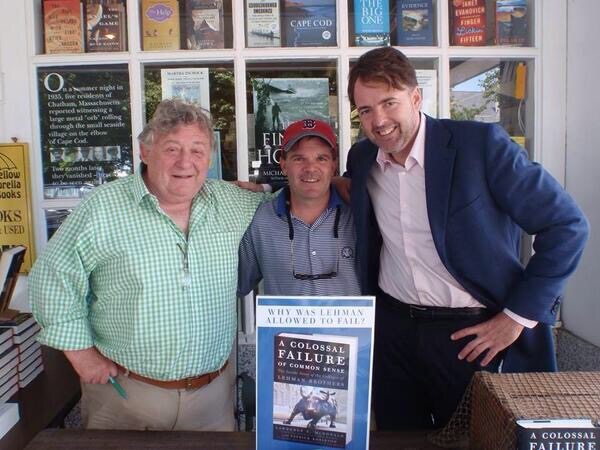 He’s best known as the former Lehman Brothers’ executive who predicted that credit-default-swap traders were “working on bringing down the whole world.”   McCarthy placed over $1.5 billion of bets against Countrywide Financial and Beazer Homes, he was a trader with unique market instincts, true vision.  Before the crash, he wisely left the doomed firm in 2007 and made his fateful declaration to a large audience at his retirement party.   It’s the stuff legends are made of.

“The debtors’ conduct, on its face, is suspect.”

Hidden below, are some classic trading lessons that have more to do with psychology and attitude than anything else, virtues McCarthy mastered.

It was the Fall of 2005, the one person in all of Lehman Brothers who believed implicitly that analyst Jane Castle was correct, was Larry McCarthy. One of the most fearless traders ever to work on Wall Street, he would hear no word against her assessment of the Delta situation and indeed had, working in concert with Joe Beggans and me, bought $750 million worth of the airline’s bonds during the company’s bankruptcy. He was keenly aware that it may be months before the price climbed to the levels Jane predicted. But he was sure of our position. And like all true gamblers, he was sure that his luck was running.

As a matter of fact, he kept buying all through the next month, whenever an opportunity came up.  In truth, the situation at Delta itself did not really improve. Unrest in the Middle East continued, and the pilots were threatening to strike, which would blow Delta’s normal operations asunder, and cut off their cash-flow, which was, at this stage, their lifeblood. Larry was, however, adamant.

“It’s what Jane says. Those bonds are worth a lot more than 12 cents on the dollar. They got damn Boeings, hundreds of ‘em, parked all over Georgia.” (A year later the bonds traded at 65.)

He was world-class at both blackjack and stud poker. He was our very own Lehman Kid, cards or stocks, he had nerves of sprung steel, and a radar for those moments when Lady Luck was with him. He had a nose for victory and an instinct for trouble. And when he scented the former, there was no shaking him off.

Larry and I used to go off gambling together. I suppose it was in our blood, and there’s a lot of guys like that on Wall Street, cold and determined with the firm’s cash, but addicted to the chase, calculating the odds, the risk-reward ratio. I guess we’re all junkies for the thrill of being right, of winning, always winning. 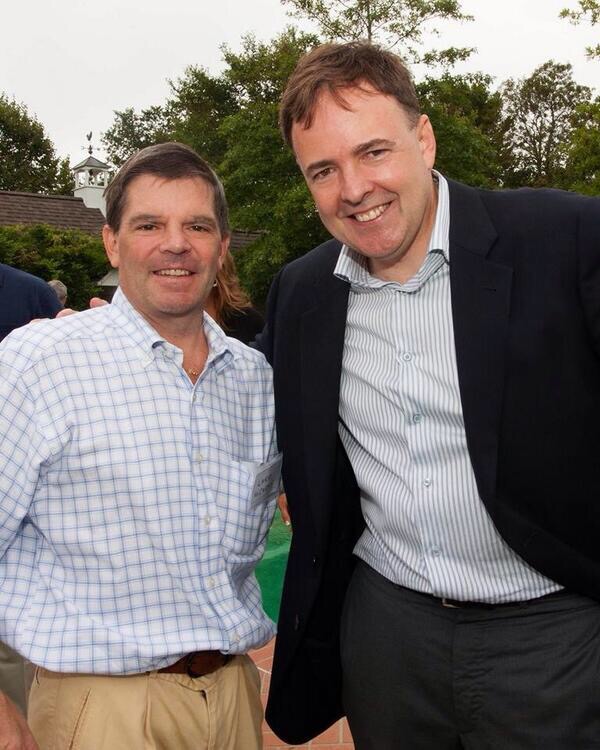 “In trading, the pain and fear you feel is in direct proportion to the size of the opportunity. Buying right NEVER feels good”

I’ll tell you just one story about McCarthy, and then you’ll know precisely what manner of a man held those Delta bonds. It was around that time in the year, as I said the Fall of 2005, and we had decided to have a couple of days up at Mohegan Sun, the spectacular Indian reservation casino in the deep woods of Connecticut on the banks of the Thames River.

These were days of immense prosperity for the investment banks and we were entertaining some heavy-hitting clients. After dinner at Michael Jordan’s Steakhouse, we headed for the tables for some high-rolling blackjack.

I settled into a modest corner where the stakes were around $50-$100. McCarthy went to $100-$500, a spot he had occupied many, many times before. But by any standards, you’d have to say the cards were not running for him. He slogged it out, going head to head with the dealer, but nothing could change his luck. After two hours he’d blown a very large hole in $75,000. An hour later he’d lost $100,000. The dealer was pulling seven-card 21’s, and never busting.

I saw him three times double down on a 10, and then pull a 10; only for the dealer to hit 21 again, and then again. The pressure was relentless. The shocking bad luck apparently endless. But McCarthy never flickered, never stopped smiling, never stopped wisecracking his way through the evening. Never once did he lose his cool, laughing cheerfully with the pit bosses, and the dealers, who knew, to a man, the cards had turned against him, before he even started.

After four hours he had blown out $165,000. Nothing had gone right, nothing had been even reasonable. Lady Luck had sure as hell cashed her Delta bonds. But Larry stayed positive, once handing the cocktail waitress a $500 tip. Finally, I found it impossible, even if he could go on taking this financial bashing. I took him aside and told him, “Come on, Buddy, this is a disaster. I’ve calculated your losses. You’re $165,000 down. Let’s call it a night.”

I’ll never forget his reply. He stared at me hard, and he said, “This is all about positive staying power, old pal.  Most people quit in life when they’re just three feet from the gold. But you got to be there with the big bucks, for the turn. Because it always turns. Remember that. Everyone has good luck. Everyone has bad. Just don’t stampede for the f…ing exits when there’s a minor setback. Because it’s gonna turn. Trust me, it’s gonna turn, and that’s when you want to be there.”

“Always take a long look around the table for the sucker – if you can’t find him – it’s probably you.”

I just shook my head, at the sheer guts of the man. And he told me to call the pit-boss and get another $100,000. He was playing on, and his credit was good.

He asked us to give him a little room. Then he collected his $100,000 and took over the whole table, all six slots. They roped off the area, except for him and me, and he started with $2,500 on each hand, that’s $15,000 on each round against the dealer. That gave him a very slight advantage because there was no one else playing, catching the good hand. I watched him win a few, then lose a few. And then, suddenly, the dealer, ‘busted’ three hands in a row for the first time in close to five hours. There was a classic shift in momentum, he smelled it and hauled back $15,000. Then Larry pulled something which was nothing less than a mind-blower.

The pit-boss nodded, and came back with a new sign which read, “Table Max $10,000 a hand.” Larry proceeded to pile on his $1,000 chips, ten of them on all six slots. But the cards were not pretty. His best was a 16, but the dealer’s cards were worse.

There was a six, but when the second card turned, it was the dreaded five, and this meant if she drew a face-card she had 21, and Larry was down another $60,000.

The dealer, still under 17, had to go again. Almost 30 people crammed outside the ropes, watching this fight to the finish, holding their breath. The dealer turned the card. It was a three, which made 14. Larry never blinked. The dealer turned again, an ace, for 15. Larry stared straight ahead. And the dealer turned again and pulled yet another ace. That was still only 16. This was sensational. But the dealer had to turn again. And it was as if the heartbeat of the entire casino had come to a halt. The pit-bosses had moved in and were standing watch with the crowd. Cocktail waitresses stopped serving, and a kind of telepathy swept around the gaming room. It was as if everyone was aware of the titanic struggle between the casino’s ace dealer, and Larry McCarthy from Wall Street, with $70,000 riding on the turn of a card.

I watched the dealer gasp, and then reach for the ‘shoe,’ selecting the card. For a split second, the hand that covered that card paused, and then spun it over, to reveal the Queen of Spades. Dealer’s bust – 26.

After five hours, Larry’s luck had finally turned, and he leapt at me, tackled both of us right off our stools, into the velvet ropes and on to the floor in front of all the spectators, both of us laughing fit to When we finally climbed back to our feet, Larry just said, “Okay, guys, let’s play some cards.” He swapped the $1,000 orange chips, the ‘pumpkins,’ for the $5,000 ‘Grey Ladies,’ and placed two of them on each spot, a $60,000 hand. And when the cards came up they were devastating – for the dealer. Four blackjacks and two 20’s for Larry! Against the dealer’s pitiful 17.

And what he said was true. I’d watched this man, beaten and beaten, and in the next two hours, I watched him ride his luck, all the way back. When we walked out of there, he was $475,000 in front. I saw it with my own eyes. I think for the first time, I finally understood why Larry McCarthy was a full-blooded Legend of Wall Street, and his name would live for a long time.

On the way out, he told me one more truth, as applicable in the market as it had been at the table. “Never blow your powder too early,” he said. “Start nice and slow, nice, and low. Get the feel of the market, get centered, make sure you got a ton of ammunition, and don’t quit too early. Never do that. When they’re running against you, keep going, because they’re gonna turn. And in the split-second they make that turn, hit it, buddy, hit it real hard. Because that’s when you’re gonna WIN.”

Larry McDonald is the creator and editor of the Bear Traps Report, a weekly independent investment letter focusing on global political and systemic risk with actionable trade ideas. Larry serves as a political policy risk consultant to hedge funds, family offices, asset managers and high net worth investors. Larry was former Head of US Macro Strategy at Societe Generale, and a frequent guest contributor on Bloomberg TV, CNBC, Fox Business, and the BBC. Larry is a NY Times bestselling author, his book “Colossal Failure of Common Sense” is now translated into 12 languages. He ran a $500 million proprietary trading book at Lehman Brothers, made over $75 million betting against the subprime mortgage crisis and was consistently one of the most profitable traders in the firm. His “Bear Traps” letter is one of the most highly regarded on Wall St. He’s participated in 3 major financial crisis documentaries: Sony Pictures, Academy Award-winning documentary the “Inside Job,” BBC‘s “The Love of Money” and CBC‘s “House of Cards.” He’s delivered over 125 keynote speeches in 17 different countries, at Banks, Investment Firms, Conferences, Law Firms, Insurance Companies and Universities.