In our New York Times bestseller, we take a deep dive into a wounded global economy and the weapons central banks have in their back pocket. Looking over the last 15 years,  two primary exogenous shocks brought the U.S. economic ecosystem to its knees; Lehman Brothers failure and COVID19. Nearly every time the Fed raised the inflation bar needed to get off the accommodation gravy train – certain asset prices responded forcefully, some FAR more than others. Let’s explore…

What is Forward Guidance and How do Asset Classes Perform During Weeks when it has been Aggressively Used?

On Wednesday, April 29th the Federal Reserve meets for the first time since mid-March, that’s close to 27 million jobless claims ago. Unimaginable heartbreak and destruction will very likely result in an even more creative tool kit from central banks.

It’s all about the Fed conveying more certainty of the economic data allowing them to stay lower for longer. The whole point is new language – in the statement – allowing for an overshoot on inflation. Acceptance of a level – well above – their well stated 2% PCE target.

This Week: The Ultimate Message from the Fed

The Fed has Five Primary Weapons, BUT really JUST ONE;

1) Rate cuts are out of gas (the Fed has cut its upper-bound target rate from 2.50% in July, to 0.25% in March).
2) Unconventional balance sheet creativity (is out of gas for now, the political backlash coming at high yield buying promises is growing. We believe the Fed wants to keep this powder dry. They have yet to buy a high yield bond).
3) Forward guidance (lots of bullets in the chamber)
4. YCC (yield curve control, NOT there yet).
5. Negative interest rates (NOT there yet).*

***‘Unprecedented situations require unprecedented actions. That’s why the U.S. Federal Reserve should fight a rapidly deepening recession by taking interest rates below zero for the first time ever’

***So far this has been the most aggressive discussion on the Fed going negative yield, but how much influence does an ex-Fed President have? We say NOT much. The real tell – trial balloon – would be coming out of a Lael Brainard speech, that’s not happening, as of yet.

Have Gold Bugs figured out Gold is a Rates Trade?

Precious metals are NOT inflation driven for now. Weak inflation data and higher gold prices go hand in hand, this is the opposite of what “gold bugs” have been preaching for the last 30 years. Many don’t realize precious metals respond to heightened deflation risk as much as they do to inflation risk.

Over the last 40 yrs, we’ve been lectured on the relationship between gold / silver and inflation, but it’s really about price stability. Markets have been pricing in deflationary risks for much of this year. The bottom line, all you need to know is when central banks lose control of prices – it triggers meaningful tailwinds for precious metals.

How do Asset Classes Perform?

Forward Guidance – What’s fascinating is, the first 4 times they used it in the post-Lehman era – the market believed them (2008-2012). Gold and Silver responded forcefully early on, each of the 4 times. Then, the weapon (forward guidance) became the “boy that cried wolf” in 2012. The markets smelled out the coming 2013 taper and gold and silver collapsed.

How do Asset Prices Respond?

Over the years, the FOMC used forward guidance to support economic activity and a return of inflation to its 2 percent target.  Gold and Silver responded to these events meaningfully: (see the attached chart above).

December 16, 2008: The FOMC lowered its target for the federal funds rate to a range of 0 to 1/4 percent, which the FOMC considered an effective lower bound. In addition, the Committee stated that “weak economic conditions are likely to warrant exceptionally low levels of the federal funds rate for some time.” Back in 2008, from December 15 to February 20 of the following year; Silver was 42% higher with Gold 26% to the upside.

September 13, 2012: In conjunction with the announcement of its third large-scale asset purchase program (henceforth “LSAP3”), the FOMC states that it “expects that a highly accommodative stance of monetary policy will remain appropriate for a considerable time after the economic recovery strengthens.” In addition, it indicates that exceptionally low levels for the federal funds rate are likely to be warranted “at least through mid-2015.” Back in 2012, from August to October, Silver was 30% higher with gold up 12%.

Rate cuts get vaporized in a swift economic downturn. This week, the Fed will tell us if they use forward guidance now – with force – while the US economy’s struggles are in deep/early stage, we’ll actually have a chance at fighting off deflation and the negative rate trap in Europe and Japan. The bottom line, they will back up the truck on forward guidance.

A Lot is at Stake

As our friend Chris Cole points out, some people think private equity is a “defensive asset.” It’s NOT. In a global recession, state pensions with over 71% exposure to equity-like assets, will face a $3-10T solvency problem if Japan-like deflation occurs without greater allocation to true diversifiers like gold, silver, and long equity volatility strategies. We are coming to a point where real interest rate returns are pushed so low that investors holding the debt won’t want to hold it and will start to move to something they think is better. In our view, investors desperately want a deflation or inflation hedge.

We love technical analysts, some of our closest associates are in this profession, BUT let us be VERY clear. Looking at charts without a macro overlay lens only shows you half the picture. As you can see above, back in June 2019, the technical picture was bright for gold. Even more attractive – budget deficits in Washington were surging and a trade war was punishing the global economy. Both factors were forcing the Fed into a far more accommodative policy stance, gold’s ultimate fuel.

An Ugly Budget Coming out of Washington

U.S. budget deficit increased by $140 billion during the first nine months of last year to $747.1 billion as government revenues and spending both hit records. BEFORE covid19 arrived – the Treasury Department’s deficit was up 23.1% over the same period a year before with tax receipts rising by just 2.7%. The Trump administration forecasted a deficit for the full budget year, which ended on Sept. 30, topping $1 trillion, up from a deficit of $779 billion the year before. This number is NOW close to $4T. The US’s budget deficit will end the fiscal year at almost 18% of GDP, its highest level since the year after World War II ended and up from 4.6% in 2019: CBO data. Congressional Budget Office says coronavirus aid, likely recession to cause the deficit to reach $3.7 trillion this year.

The world is facing a colossal need to fund liabilities – this will fule the mad rush into alternatives, Next, there simply is not enough capital to meet the needs for it – large deficits that are being monetized. We are about to come into a world with thousands of Yanis Varoufakis like leftists – private property rights are fleeting.

“I shall wear the creditors’ loathing with pride.”

*”Yanis” Varoufakis is a Greek economist, academic, philosopher and politician. He has been Secretary-General of MeRA25, a left-wing political party, since he founded it in 2018. A former member of Syriza, he served as Minister of Finance from January to July 2015 under Prime Minister Alexis Tsipras.

Down the Road Ahead

Central bank asset purchases, currency depreciation, and large tax increases have increased the conflicts between the capitalist haves and the socialist have-nots. Holders of debt will receive very low or negative nominal and real returns in currencies that are weakening, which will de facto be a wealth tax.

What is Forward Guidance, and how is it used in the Federal Reserve’s Monetary Policy? 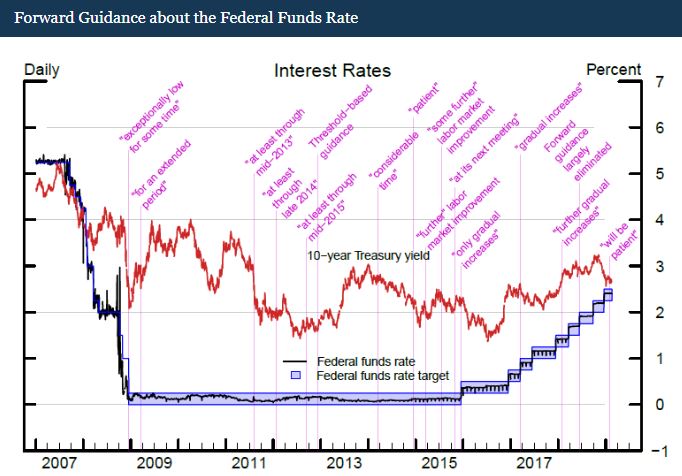 Per the Fed’s own claims, forward guidance is a tool that central banks use to provide communication to the public about the likely future course of monetary policy. When central banks provide forward guidance, individuals and businesses will use this information in making decisions about spending and investments. Thus, forward guidance about future policy can influence financial and economic conditions today.  The Federal Open Market Committee (FOMC) began using forward guidance in its postmeeting statements in the early 2000s. Before increasing its target for the federal funds rate in June 2004, the FOMC used a sequence of changes in its statement language to signal that it was approaching the time at which a tightening of monetary policy was warranted (for a review of that experience, see Feds Note “The Effects of FOMC Communications Before Policy Tightening in 1994 and 2004”).  In the aftermath of the global financial crisis, the FOMC reduced its federal funds rate target nearly to zero and then used forward guidance to provide information about likely future monetary policy. For example, the postmeeting statement issued in December 2008 noted that the Committee anticipated that weak economic conditions were “likely to warrant exceptionally low levels of the federal funds rate for some time.” The FOMC’s forward guidance has evolved over time; eventually, the Committee’s guidance indicated that the future path of the federal funds rate would depend upon how future economic conditions changed. In addition, the FOMC used forward guidance language about the flow-based asset purchase program that it undertook in September 2012.

“Bonds are a claim on money and governments are likely to continue printing money to pay their debts with devalued money. That’s the easiest and least controversial way to reduce the debt burdens and without raising taxes. My guess is that bonds will provide bad real and nominal returns for those who hold them, but not lead to significant price declines and higher interest rates because I think that it is most likely that central banks will buy more of them to hold interest rates down and keep prices up. In other words, I suspect that the new paradigm will be characterized by large debt monetizations that will be most similar to those that occurred in the 1940s war years. So, the big question worth pondering at this time is which investments will perform well in a reflationary environment? A world with large liabilities coming due and with significant internal conflict between capitalists and socialists, as well as external conflicts. Most people now believe the best “risky investments” will continue to be equity and equity-like investments, such as leveraged private equity, leveraged real estate, and venture capital, and this is especially true when central banks are reflating. As a result, the world is leveraged long, holding assets that have low real and nominal expected returns that are also providing historically low returns relative to cash returns (because of the enormous amount of money that has been pumped into the hands of investors by central banks and because of other economic forces that are making companies flush with cash).  I think these are unlikely to be good real returning investments and that those that will most likely do best will be those that do well when the value of money is being depreciated and domestic and international conflicts are significant, such as gold. Additionally, for reasons I will explain in the near future, most investors are underweighted in such assets, meaning that if they just wanted to have a better-balanced portfolio to reduce risk, they would have more of this sort of asset. For this reason, I believe that it would be both risk-reducing and return-enhancing to consider adding gold to one’s portfolio.”