Sorkin and McDonald Dig In 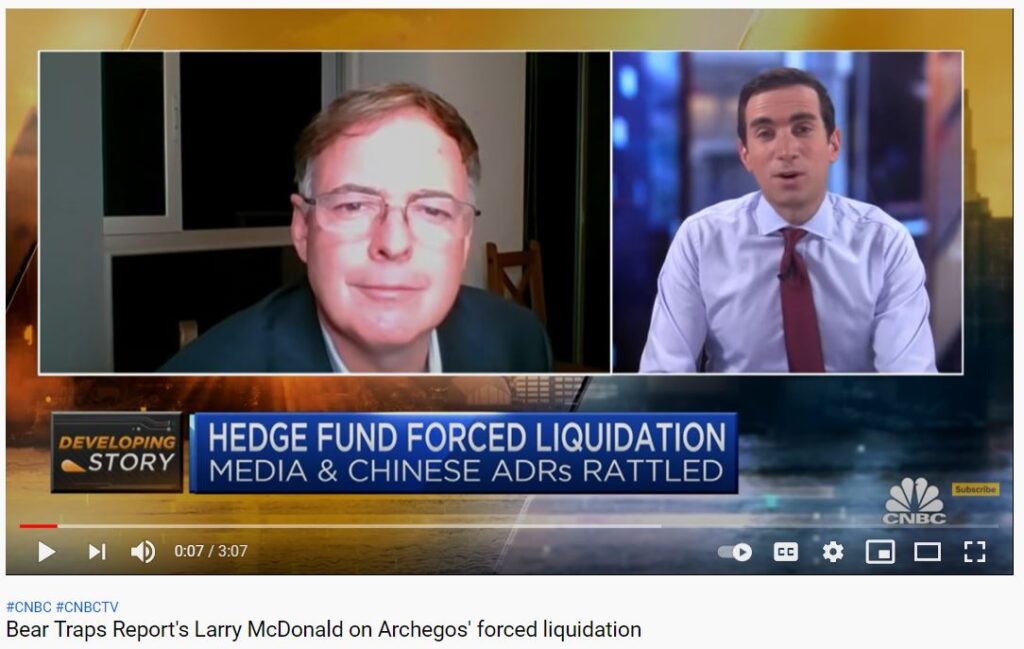 Our Larry McDonald, author of a “Colossal Failure of Common Sense”, and Andrew Ross Sorkin of “Too Big to Fail” fame – weigh in on bank credit risk.

*CREDIT SUISSE FALLS 10% ON POTENTIAL LOSS FROM HEDGE FUND
*NOMURA CLOSES DOWN 16.3%, MOST ON RECORD, AFTER LOSS WARNING

The forced liquidation of more than $30 billion in holdings linked to Bill Hwang’s investment firm is shining much-needed light onto slimy financial instruments he used to build large stakes in companies.

Much of the leverage used by Hwang’s Archegos Capital Management was provided by banks including Nomura Holdings Inc. and Credit Suisse Group AG through swaps or so-called contracts-for-difference. We agree with Bloomberg here, it means Archegos may never actually have owned most of the underlying securities — if any at all.

The Great Deleveraging: If Nomura dropped $2 billion on the mismatch between trade execution on margin calls and/or remaining contractual risk then the knock-on effect is going to be on every Prime Broker credit desk. We will see them become far more stingy and likely tighten margin requirements. If you are making 1% and you are 10x levered that is 10% annualized, but 10% at 10x levered is 100% and so intoxicating in every cycle.

All the signs were there Friday. Banks with credit risk tied closest to hedge fund blow-ups dramatically underperformed.

Think of Andrew Ross Sorkin’s global bestseller, “Too Big to Fail” – the book was focused on the money center banks. That’s where the leverage was from 2005-2008.  Banks like Lehman would use phony facades like Repo-105 to juice leverage, massively. Regulators were blind, light-years behind the innovative games. Today, the leverage is now on the hedge fund side. Central banks and regulators are once again way behind. They are oblivious to many of the latest leverage weaponry, 21st-century games.

Why is this happening with equities at all-time highs?! Can you imagine the carnage if there was ever a shock to the system, an unexpected event like 9-11 would cause an extended crash, too much leverage.

The key is that hedge funds (and family offices!) are using the banks’ cost of capital via TRS.

TRS: It appears that he (Bill Hwang) transacted exclusively in Total Return Swaps.  This enables him to avoid disclosure.  Some of the positions were held at multiple banks. The banks may not have known this. How to turn $15B AUM into $80B? The fun will really start when Senator Elizabeth Warren figures out this latest insult to risk management.

The most egregious holding is GSX Technidu.  This is a Chinese education company.  Muddy Waters and others have documented how this is almost certainly a fraud.

It appears ARCHEGOS had more than half the tradable shares in swap with multiple banks.  This appears to be an attempt to corner the market and create a manipulative squeeze.  Given that the stock went from $30 when Muddy Waters first published to $140, we’d say this WAS successful.

Our complete lack of securities regulation allows for this kind of manipulation.  We should not be calling Reddit posters to be in front of Congress.  Instead, it should be Securities Regulators, who permit this manipulation.

*When central bankers do NOT allow the business cycle to function over longer and longer lengths of time, capital will always matriculate into toxic places. A moral hazard overdose has arrived.

Four in 13, all Leverage

Credit Suisse Equity has been Telling Us Something

Friday’s volume was pointing to some real issues. In recent weeks as the Lex Greensill debacle sucked more oxygen out of the air, CS equity has been dramatically underperforming. Institutional clients in our live chat were asking this week if Nomura’s pain is $2-4B, doesn’t that put CS in the $6-8B range? Any capital issues for the bank? Do they have to start de-risking or seek to raise more capital? All at quarter-end? With $275B of risk-weighted assets by the end of 2020 and a 12.5 CET1 ratio, this equals $34.375B capital. Clients we trust see a high risk of impairments.

LTCM blew up in 1998, losing $4.6 billion in less than three months caused by high leverage exposure to arbitrage bets across related but different securities – which fell under pressure once the Russia crisis hit. Niall Ferguson is right when he points out that LTCM’s models only used five years of historical data, thereby not including the 1987 crash. The result? Mispriced risk parameters. So when a crisis hit, LTCM blew up.

Thirteen months ago a once in a 100-year crisis hit in the form of the Covid-19 pandemic that Relative Value hedge funds hadn’t modeled for. The result? Mispricing of risk parameters. So when lockdowns hit and the Fed surprised with an inter-meeting rate cut, Relative Value strategies were crushed.

In January of this year, hedge funds such as Melvin Capital were short various small to medium-sized firms as a big percentage of the float on a highly levered basis. However, no one foresaw that fiscal stimulus checks would be used by twenty-something stock market neophytes to organize short squeezes on social media. The result? Those levered short plays blew up.

And now we have Friday’s Archegos Capital’s blow up, a hedge fund that was levered long names like Farfetch, Discovery, GSX, Teschedu, Baidu, Tencent, Music Entertainment, Viacom, Vipshop, iQiyi Inc. et al, all hedged with S&P and QQQ index shorts. What was the leverage mechanism? Total Return Swaps. The leverage caught up with Archegos. The result? Rolling liquidations of the fund’s long line items during the day. Then at 3 pm the short index cover ramp up in SPX and QQQ, nearly 2% in a straight line into the close, in spite of month/quarter-end portfolio rebalancing going the other way.

Bill Hwang who runs Archegos took $200 million and turned it into $15 billion in seven years. He used big leverage. He hung on. And he hung on some more. And finally, he hung on too long. The leverage, and more importantly, the hubris, caught up with him. Time aged, classic tale. How did he create his leverage? Total Return Swaps (TRS).

The second problem is that Archegos had TRS with multiple institutions and, given the uncoordinated large-scale selling of the same line items, it looks like the banks weren’t aware of the similarities of their cross exposures. That’s the kind of thing that may lead to regulatory scrutiny. Not illegal. Just sloppy.

A swap agreement is set up between a bank and a hedge fund. The hedge fund pays a low interest on the swap, say 2%, and the bank pays out any appreciation to the hedge fund. If there are any losses, payments are due from the hedge fund to the bank. It’s a glorified margin loan. Equity put up by the hedge fund is usually around 25% to 30%. But it can be less. The reference asset can be an equity index, a basket of specific stocks, loans or bonds. If the hedge fund’s strategy is long/short — e.g. long specific names vs short an index — the TRS is considered low risk and thus doesn’t chew up the bank’s balance sheet. The TRS means the hedge fund has risk exposure without actually owning the asset. The bank has more control in a portfolio liquidation scenario because it is the actual owner of the reference securities. Hedge funds love TRS because they get risk exposure without a large cash outlay. Essentially the funding cost comes at a slight premium to the bank’s cost of capital but at a big discount to the hedge fund’s normal cost of capital. It’s like Greece getting close to Germany’s cost of capital for being a member of the EU. The bank gives up on interest vig in exchange for transaction fees. The EU reduces Greece’s cost of capital so Greece can buy more stuff from the EU. Same generic idea. Theoretically both win — until both lose. But the hedge fund (like Greece) runs the greater risk if things don’t work out. The TRS equity cushion is meant to protect the bank in the event of untoward price movements. Hence the wild Friday.

The world survived this crisis, apparently. However, we expect in a prolonged bear market (yes, they exist), there will be more TRS disasters and eventually, they will become the focus of regulatory reforms.