As a former convertible bond trader, I have always found this unique corner of Wall St. extremely telling. Over the years we have witnessed countless clues and signals that come out of the interesting players on the field.

Robert M. Bakish is now a hall-of-fame stock seller, he’s also best known as the President and Chief Executive Officer of ViacomCBS. One of the world’s leading producers of media and entertainment content, driven by a global portfolio of powerful consumer brands, including CBS, Showtime, Nickelodeon, MTV, BET, Comedy Central, and Paramount Pictures. But, could Bob’s stock selling prowess help bring a Wall St. Bank to its knees?

This month Bakish noticed an unusual move higher in his stock price, at one point in 2021 the VIAC was 73% higher. Last week, Uncle Bob wisely approached Goldman Sachs and Morgan Stanley about selling some stock. In order to get the best price, Bob wanted to keep the sale quiet and do it quickly. He wisely stressed, “keep it, discreet boys.” On March 23, they priced close to $3B of equity and mandatory convertible securities, but the size and breadth of the sale caught some market participants off guard, some more than others indeed.

“Goldman dumps billions of dollars of stock causing losses at Nomura, then Goldman analysts downgrade Nomura because of the losses and poor risk management.”

By now, everyone knows Archegos’ Bill Hwang was a protégé and one of the so-called tiger cubs of legendary hedge fund manager Julian Robertson. What people don’t fully understand is how just one firm can abuse and leverage the TRS (total return swap infrastructure) across the prime brokerage underbelly of Wall St.

Typically associated with the fixed income market (in bonds), a total return swap is a swap agreement in which one party makes payments based on a set rate, either fixed or variable, while the other party makes payments based on the return of an underlying asset, which includes both the income it generates and any capital gains. The plus side for Archegos is they could hide the size of their positions and very quickly turn the buying power of $1 into $5 or even $10. “Estimates of Archegos total positions are climbing–billions, then $50 billion, now some traders estimate $100 billion. ” Fox Biz, Charlie Gasparino notes. The thing about these guys (like Archegos) is, (and there are a lot of them out there), the only way to accumulate that kind of extreme wealth in a short period of time is through the most extreme, reckless hubris lens. Ultimately, it’s the same perspective that forges the insane riches, that will also be the catalyst behind colossal losses taking place in the blink of an eye.

Some parts of the fixed income market remain calm, but credit risk associated with Credit Suisse is on the rise. 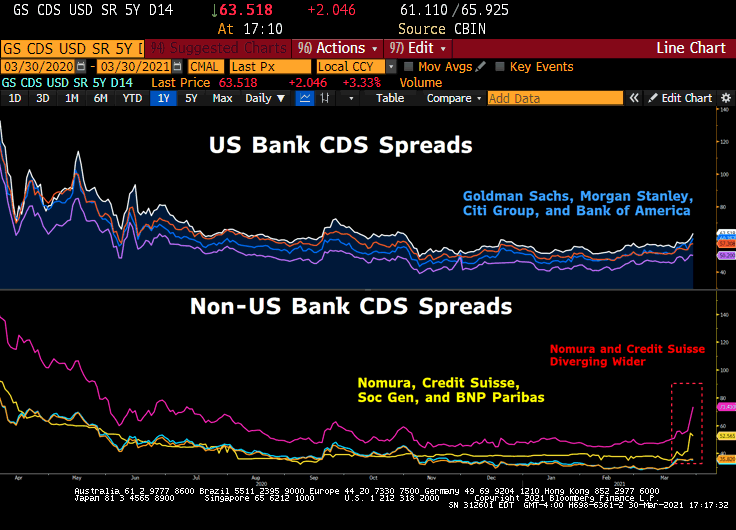 Our index of 21 Lehman Systemic Risk indicators always has a section focused on credit risk.

Institutional Client in our Live Chat on Bloomberg: “These are your ‘for cause’ reasons to rip-up an ISDA and (Goldman, Morgan Stanley) start the liquidation process of the Archegos portfolio of levered-bets. How could I start a fund of that size and just tell every other major prime broker my collateral only has eyes for them – especially after AIG?!”

There is meaningful speculation that the DOJ reached out to Goldman Sachs and Morgan Stanley on Archegos’ business practices.  Rehypothecation is the age-old practice whereby banks and brokers use, for their own purposes, assets that have been posted as collateral by their clients. The lack of transparency in the formerly highly profitable total return swap arena, left banks dancing in the darkness, oblivious. There is intoxicating greed on both ends here, greed squared. First, you have the banks who have been reaching for profits in an era of flat yield curves. “Oh, why not roll-out total return swaps to prime broker equity clients, juicy margins, lets do it.” For years, total return swaps have been used on far less volatile bond instruments, BUT putting Archegos style leverage on highly volatile equities is insane. Then there is the greed on the client-side. Many clients we respect think, firms like Archegos embraced total return swaps on high-risk equities so they could attempt to manipulate stock prices to the moon (short squeeze weaponry), wipe out short-sellers in TOTAL secrecy (no disclosures). The whole debacle is just a nasty cocktail of extreme, reckless greed.

Some Street research estimates put the stated leverage (OTC/swap) in Archegos´ reputed use of equity TRS accounted for around half of the universe of OTC equity derivatives globally. Nuts!

Unfortunately for Bill Hwang and his pile of leverage, he’s never met an overnight, size seller like Bob Bakish. Last week’s colossal VIAC offering of shares pushed deal insiders into action. The legendary “Chinese Wall” across Wall St. banks has always been made with only the finest swiss cheese. We hear the bankers involved in the stock sale leaked the details to sales covering clients and very quickly Archegos was looking at a 15% loss when it surreptitiously controlled 10-20% of all the outstanding VIAC shares. At one point last week VIAC equity was worth $60B, this week she was lurking back near $25B. On March 23, Morgan Stanley priced the stock sale at $85 (it traded as high as $100 hours later), Bakish should announce a stock buyback tonight at $45 and burn the Street’s britches into the history books. The stuff legends are made of. 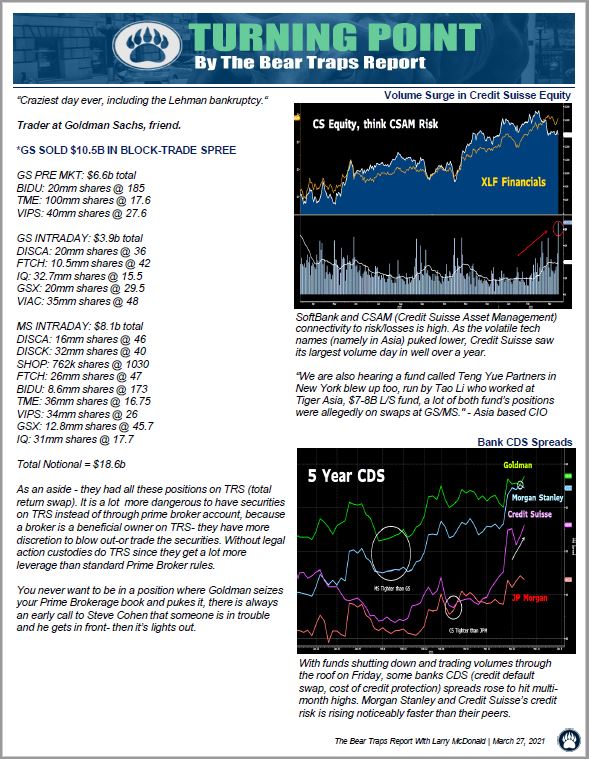 The epic sale of stock in the Archegos unwind (see above) will leave a dark stain on Wall St. for years to come.  The Credit Suisse mess is larger than what’s priced into the market. It’s NOT a Lehman size failure but they will be forced into asset sales (CSAM), and or a size rights offering. It’s beyond sinful in financial terms that PB (Prime Broker) risk across the street has such a disgusting lack of transparency. All of this will force a “come to Jesus” for the Street’s compliance departments and force a meaningful de-leveraging. Then come the regulators and House / Senate hearings. Keep in mind, this same problem went down in January with Robinhood, they could NOT properly and efficiently quantify counterparty risk during the trading-day and were forced into a capital raise. So, Q1 2021 will be forever marked by a period of reckless risk-taking breaking the system.

Wall St. has always been an industry with thousands of silos sitting in the meadow. There are times when the investment bankers are sitting on a piece of information that can nearly destroy another part of the bank (Prime Brokerage TRS Total Return Swap business) – or for sure another bank’s business. It is the ultimate game of trading on inside information, some had it first, others just a few hours later, and that can make all the difference in the world.