As the Fed concludes its two day meeting, here are few things we are monitoring.


Odds off a rate hike in December have surged to around 70%.  Much of the street is now even expecting that the Fed will directly forecast a December move in the November statement.  For example, Goldman is looking for “‘next meeting” type guidance, we do NOT agree.  The Fed will not want to box themselves in with so much prevailing risk yet to be resolved.

Back in October of 2015, the FOMC altered the statement to get the street ready for the December hike, not this time.  We’re too close to election 2016.  In preparing the market, the Fed has done their work through Fedspeak and data.  The market has already priced a high chance (near 70%) of December rate hike.  When we bought our gold miners, the rate hike odds were 55%.

With clients we are outlining these risk, trade ideas and how monetary policy will likely react.

A LOT is being Priced in 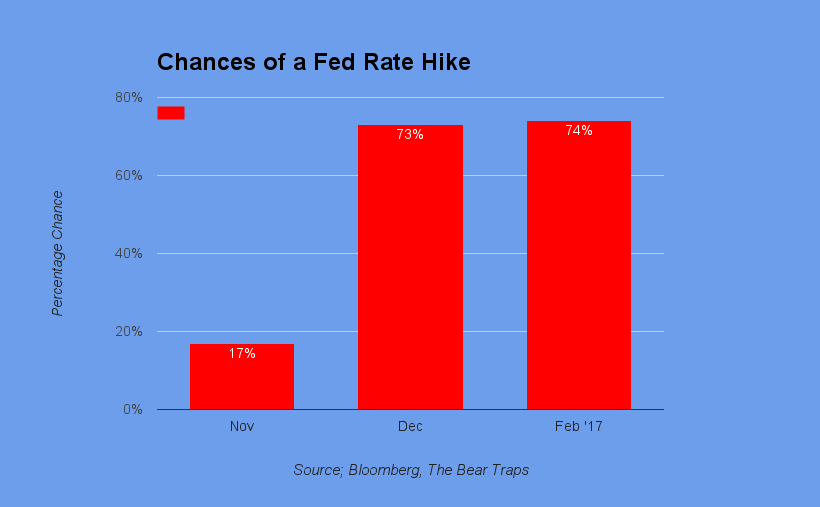 With inflation finally on the rise, continued Job gains above 150k a month and a pickup in the manufacturing sector, the market seems to be giving the Fed the all clear. We still believe that too much is being priced into the December meeting.
Much of the improved economic data from surveys such as ISM and Markit PMI, has come from the increased price of oil. A lot has changed in the early days of November as oil has puked lower!

The recent drop in Oil will surely weigh on the next release of the ISM survey as the production side has begun to assume oil would stay above $50 in medium term. This re-pricing of oil will lower the recent rise in costs and will slowdown excitement for energy and energy related producers. A reevaluation of this assumption will have negative consequences on producer activity and thus the economy.