Our friend John Authors of the Financial Times made the point below that stocks are far more expensive today during the Trump run than during Reagan’s era.


Companies: Cash as a % of Equity Market Capitalization

As you can see above, U.S. companies are rich in equity market capitalization and poor in cash on comparison.

Just four months ago the Street lectured us; bond yields are heading below 1%. Now, with treasury yields ripping higher, up almost 100 bps since Brexit, the Street says Trump’s fiscal policy and the coming inflation will lead yields higher. In the longer term this may come to fruition, but as we saw in 1980, yields ripped going into a Reagan presidency, only to revert lower in the recession that followed in the same year as his inauguration.

Honest question.  If a cold winter nearly knocks a delicate U.S. economy into recession, what will a one percent spike in interest rates result in?

As you can see here below, the Reagan yield spike was met with recession, that ultimately reversed yields lower. 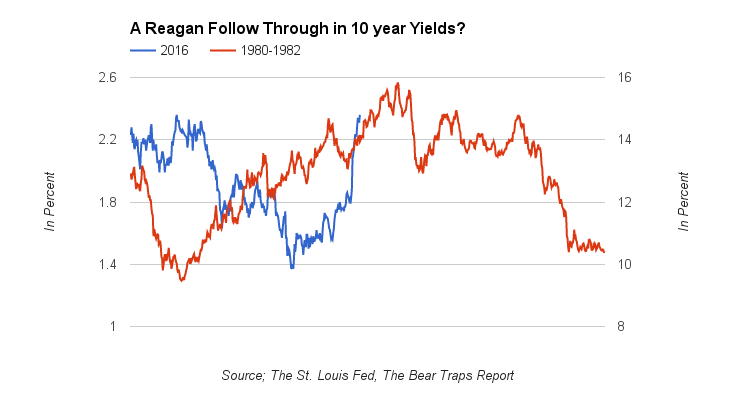 It was 1980, the U.S. 10 year Treasury bond yield bottomed out 9.5% in June, by February 1981 yields were 12.7% and nearly 16% by September of that year. The (November 1980) Reagan election brought with it a colossal yield spike, like today inflation was a key concern. However, in the middle of 1981 a recession sent yields much lower to the 10.5% level by November 1982.  The paradigm shifted, Reagan’s growth message was halted by a surge in bond yields, the economy reverted back into recession. Ten-year bond yields went down to around 13% by the end of 1981. By the end of 1982, yields had returned to their June lows of 10%.


Trump Impact: As Interest Rates Have Surged, So Have Financial Conditions

As you can see above, financial conditions have risen prior to the last two substantial S&P 500 plunges lower.  Trump’s election has brought a nearly 100bps surge in interest rates and a nearly 6% spike in the U.S. dollar.  There’s over $13T of new debt globally that’s tied to the dollar as well as 40% of S&P 500 companies with high exports outside the U.S. 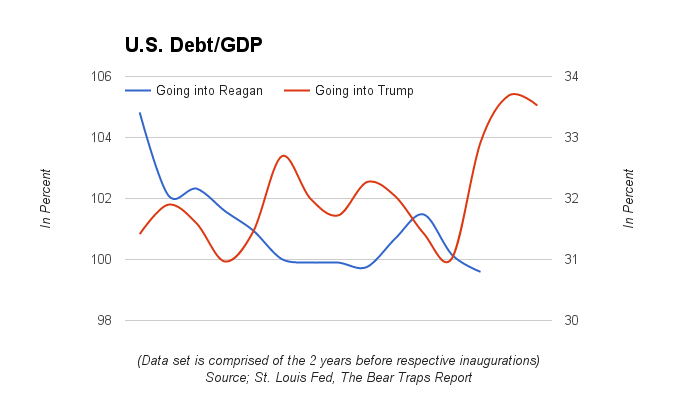 In this chart we see, the debt loads the Reagan presidency inherited vs. the debt situation that Trump will have to deal with when he assumes office. The interest rate story is obviously radically different with longer end rates at 2.5%, vs 12% in 1980, however, this will affect how much leeway Trump has with his spending plans in a way it did not for Reagan.

To get our reports on where yields and the economy is headed, join us.

As yields surged 1980 into 1981, U.S. GDP plummeted.  This is what we are seeing  now, the tightening of the financial conditions is setting the seeds for the next recession.

Following the financial tightening the economy experienced, a recession ensued. This eventually led to the collapse in rates which saw the 10 year yield lower than it was before Reagan’s election victory.