Tremors Before the Quake

At close to 7% off this month’s sky highs, U.S. equity market leadership found in Microsoft is fleeting. Trading at nearly 12x sales, MSFT investors have started to rotate out of big tech this week. The insanity of paying 12x sales for large-cap stocks speaks to the greater fool theory. You really need the next guy to come in and lift you out of your shares at an even higher price. At nosebleed valuations, that’s your ultimate investment philosophy. After founding Sun Microsystems in 1982, years later Scott McNealy once said, “At 10x revenues, to give you a 10-year payback, I have to pay you 100% of revenues for 10 straight years and dividends. That assumes; shareholders approve, zero-cost goods sold, zero expenses, no taxes, zero R&D, + we maintain the current revenue growth run rate. Now, having done that, would any of you like to buy my stock at $64? Do you realize how ridiculous those basic assumptions are? You don’t need any transparency, any footnotes. What were you thinking?”

“If everyone is thinking alike, then someone is NOT thinking.”

It’s now very close to 40% of the S&P 500, yes BIG TECH. Looking back, the only other sectors to ever position themselves even remotely close to this lofty level is Energy** at 29% in December of 1980, and Financials*** at 28% in 2007. We know what happened next to those two sectors. Beware, the inmates are running the asylum.

Wall St.’s collection of brain trusts just love Microsoft MSFT, they’re falling all over themselves to upgrade the stock. With the energy of a mad mob, thirty-six analysts cover Microsoft equity; 32 “buys” vs. 4 “holds” and ZERO sells. Of course, when MSFT was on sale in March-April we heard crickets from this crowd, they were too focused on the “great depression.” Today, they’re in a better mood, expectations for MSFT’s sales growth are up at 8%, near $37B, with earnings per share close to $1.40. The situation is much like the analysts’ former darling, Exxon $XOM. In the summer of 2014, the stock was priced for absolute perfection. There wasn’t a bear to be found across all the Wall St. banks -then shares lost 71% of their value. By now, who doesn’t know Microsoft’s cloud portfolio products are clear beneficiaries in the “work from home” boom? The Information points out, “In this quarter, it is worth watching the rate of growth for Microsoft’s Slack-killer product, Teams, which saw surging usage in the March quarter. A related question is whether people are taking advantage of Teams’ video function, which competes with Zoom. And will Microsoft executives talk about their success in dealing with capacity shortages in their cloud business?”

Microsoft MSFT From the Lows

ETFs now hold nearly $5T up from $500B a decade ago. Per Bloomberg Intelligence, new research has directly connected the explosive growth of passive investing to deteriorating corporate performance over the long haul.  In a paper posted this month, a trio of academics tracked share-buyback activity for a range of companies and found those with higher passive ownership spent more on stock repurchases but saw worse financial outcomes. Having disengaged owners “lowered the association” between buybacks and future performance, according to authors Brian Bratten and Jeff Payne of the University of Kentucky and Meng Huang of the University of Toledo. It was also positively associated with “suspect” repurchases — those that resulted in companies meeting or beating near-term earnings expectations. “Our study provides evidence that passive investment may allow opportunistic management behavior that negatively affects future firm performance,” they wrote. “The growing influence of passive investment may lead firms to make repurchase decisions that are inconsistent with the interests of investors.”  The findings are the latest twist in the raging debate about the rise of passive investing. A growing body of literature has raised issues such as the erosion of rivalry between companies, but research over the role of index-tracking funds in corporate governance has delivered mixed conclusions. One notable study in 2016 strongly connected passive investing to improved management.

The Active vs. Passive Debate

As passive flows surge, they flow into MSFT, not Berkshire*. Over the last 5 years, there’s an additional $2T that’s flowed into the passive bucket relative to active asset management. Total returns last 5-years? MSFT 380% vs. BRK/B’s 32%. But the flows since March are all about the colossal overweight tech crowd (pure madness) and the perception of a new US cloud-based economy. So you have a double barrel mania going on here. First, the explosion of PAM (passive asset management assets under management) and then the afterburners kicked in. You have a large number of asset managers trying to keep up with the S&P 500 index performance, and a panic that they’re not long enough of our new cloud-based, remote living world companies (like Microsoft). Over the last 50 years, Berkshire BRK/A does not trade at valuations of < 1.2x book for very long. Most times, significant rallies ensue regardless of the rest of the market’s performance. In the summer of 2016, there were only $32B of (passive) assets in QQQs vs. $121B today. A large portion of those new assets have been forced into MSFT shares, there is NO choice on the matter, see below.

*For every $100B slowing into passive asset management (S&P 500 Index Funds), close to $6B of those new assets under management moves into MSFT vs. a little over $1B into BRK/B.  The QQQs offer the real juice, for $100B of new AUM, $11B flows into MSFT vs. $0B for Berkshire. Some of the AUM above is price appreciation, not necessarily new dollars in the QQQs.

Indexing doesn’t ramp value like growth because “value” has a far more dispersed ownership-base and higher float. Growth tends to be “new” money with high internal ownership, with a small float easily pushed around.  The bottom line, the distortion is caused by indexing.

In another disturbing turn of events, for only the second time since the March lows, MSFT closed BELOW its 20-day moving average (purple line above). In our view, this is sure to bring in algos and momentum selling next week. Some of the high impact machines are (programmed) triggered to exit on key technical levels. MSFT has held the 20-day since March. Holding this level brings in momentum buyers, failing will bring in a flush of exiters. The SELL Signals are lining up at the traffic light. 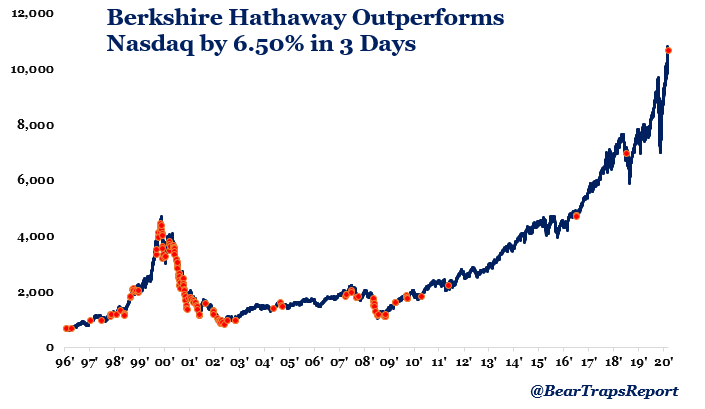 The Russell 2000 Index ripped higher by nearly 4% on Wednesday while the Nasdaq was relatively flat. Looking over the past 2 decades, when the Nasdaq (growth stocks) experiences this severe an underperformance vs. the Russell 2000 (value) it has usually coincided with the peak and/or downtrend of a cycle. A similar dynamic has played out with Berkshire Hathaway which as of yesterday’s close, has outperformed the Nasdaq by over 6.5% in the past 3 days. This is only the 3rd time since 2012 where BRK outperformed the Nasdaq by this much.

This week it’s important to note, as the US technology sector moved close to correction territory – capital was flowing into China. The total value of shares trading on the Shanghai and Shenzhen exchanges surged to near $10T, the best level since 2015. The U.S. dollar’s recent plunge puts big tech in an uncomfortable position. In recent years global calamities (Brexit, Trade Wars, COVID Phase 1) have pushed capital into the USA, NOT out.  As the U.S. struggles relative to the RoW (rest of the world), for the first time in years, dollars are leaving U.S. shores.