Breaking: TESLA GAAP income was $104MM. This means that without a record $421MM in regulatory credit sales it would have negative GAAP earnings… – ZH
The Big Day

Warning: Tesla appears to be “selling” regulatory credits based on cars they may not have yet sold to people who have not paid for them. They gave a fresh, weird explanation for accounts receivable. The quarter is a conjured profit to get in the S&P (no surprise there).

Our Conclusion on S&P 500 Inclusion

One question. How on earth can the committee at S&P, vote to include Tesla at this point in time?  Such a declaration would be built on the basis of the last twelve months “earnings” in the red to the tune of $675m to $685m.  After we exclude the EV credit sales, there is NO there, there. Even Tesla’s CFO says; “we don’t manage the business with the assumption that regulatory credits will contribute in a significant way in the future.”

In summary, S&P 500 inclusion needs the sum over the past 4 quarters to be profitable on a GAAP EPS basis, with the most recent quarter being profitable as well, thus TSLA has NEVER been in the index.

Translation: “Recognize revenue… at the time control… is transferred to the purchasing party”

Hello: “Hey FCA CFO – this is Frenchy over at Tesla. Do you understand that pooling arrangement? I’m passing control of those credits now to you over to the second half of the year. Relax, you will NOT have to make payment at this point. On our end, we will place this in the accounts receivable accrual process. With our multi-year contract, it won’t impact you one bit.”

They admitted it’s all in accounts receivable. Smells like a fraud???

Tesla reported Wednesday, July 22 after the close. The implied move (↑↓) on the earnings – as priced by the options market – was ~20%.

**For our previous report on gaming the S&P 500 index inclusion process, see our post here.

Credit Markets Are Sending a Message to Mr. Musk

This is remarkable data, Tesla’s five-year bonds are yielding nearly 400bps more than their possible market capitalization neighbors in the S&P 500.

Tesla more than a week ago reported that Q2 deliveries totaled 90.6K, strongly beating consensus of 70.3K. In a recent email, Musk told employees “breaking even is looking super tight,” seemingly suggesting a substantially greater outcome in 2Q than the loss many analysts were looking for. Musk can inflate these results with one-time items such as ZEV credit sales or releasing deferred revenue associated with autonomous driving features. He’s done that before and he has every reason to do so now. If Q2 is profitable, TSLA is eligible to enter the S&P. On our calculations, funds tracking this bellwether index would then need to buy $30bl of TSLA stock (see calculation below).

Note that Wall St is still expecting a modest non-GAAP loss of 22 cents and a GAAP loss of $1.8.

*Buying pressure from S&P inclusion: There is approximately $3.9Tr of pure index capital following the S&P 500. These are mostly index funds, including ETFs and mutual funds that mimic the S&P. TSLA market cap is $278bl but Musk owns 18.4% of the stock. The free-float market cap is therefore $220bl. Base on the S&P 500 market value of 27.8TR that means TSLA should get a 0.8% weight in the S&P. This implying $30bl of buying power from index buyers. Note that every $100 on TSLA stock price means $3bl additional buying power from index trackers and vice versa.

Musk’s big payday: Based on the 2018 performance award program, TSLA has achieved its 3rd milestone needed to unlock the first of the twelve tranches of stock option awards to Musk. The first tranch unlocks if TSLA has a market cap of $100bl for 6 months (and sales/EBITDA milestones) and allows Musk to buy 1.7ml shares at $350 p.s. That means he locks in a cool $1.8bl. The caveat being that Musk would need to hold these shares for 5 years.

In summary, S&P 500 inclusion needs the sum over the past 4 quarters to be profitable on a GAAP EPS basis, with the most recent quarter being profitable as well, thus TSLA has NEVER been in the index. After years of consistent negative EPS prints, starting in Q3 2019 Tesla began reporting positive EPS. The past 3 quarters have now been positive, meaning if this quarter is also positive (sum of past 4 positive + most recent positive), Tesla will be eligible for S&P 500 index inclusion. Keep in mind, even if they post a small loss, the company could still be eligible next quarter if they report positive EPS and the sum of the previous 4 quarters is positive. With a total enterprise value now close to $300B, and Tesla reports on July 22., people are betting the people at S&P are eager to add. By buying up the stock now, speculators are forcing the S&P to give the stock a higher and higher weighting. Thus, ETFs / Indexes will be forced to pay up, buying even more shares. Then the hot money exits, leaving indexes holding the bag.

S&P 500 Index Committee; all members are full-time professional members of S&P Dow Jones Indices’ staff. The committee meets monthly. At each meeting the Index Committee reviews pending corporate actions that may affect index constituents, statistics comparing the composition of the indices to the market, companies that are being considered as candidates for addition to an index, and any significant market events. Facebook $FB – S&P published its decision on Dec 11, 2013, front-runners pushed the stock 140% higher from June into the big day. $FB was eligible for several months to enter that index the Committee passed over $FB at several meetings until deciding to include the company.

1.       They will almost certainly make a profit.  Last year they lost $400 MM in Q2.  This year they sold almost exactly the same number of cars.  They sold them at lower prices.  They operated two car factories instead of one, which drives up fixed costs.  There is no reason they should genuinely do better this year than last.  But, since we are all willing to be blind to this obvious book cooking, they will, for sure, announce a profit.

2.       Eligibility in the S&P does not equal inclusion.  TSLA stock is up many billions of dollars on the most widely discussed catalyst (S&P inclusion).  It’s up to the committee to decide whether the millions of investors who have chosen to index will be forced to sell 499 other stocks to make room for TSLA.  Even if they don’t believe its fraud, they may understand that they are being gamed.  They may add it right away…or they may take a wait and see.  Tough spot for them.

3.       There is something called “completion funds” which own all the stocks, not in the index.  There is a ton of money in these, as well.  Due to TSLA’s outsized market cap, it is by far the largest component of completions funds.  The completion funds will have to sell TSLA when it gets added to the index.  This will offset a great deal of the index buying power.

Josh Brown and Larry McDonald Break it Down 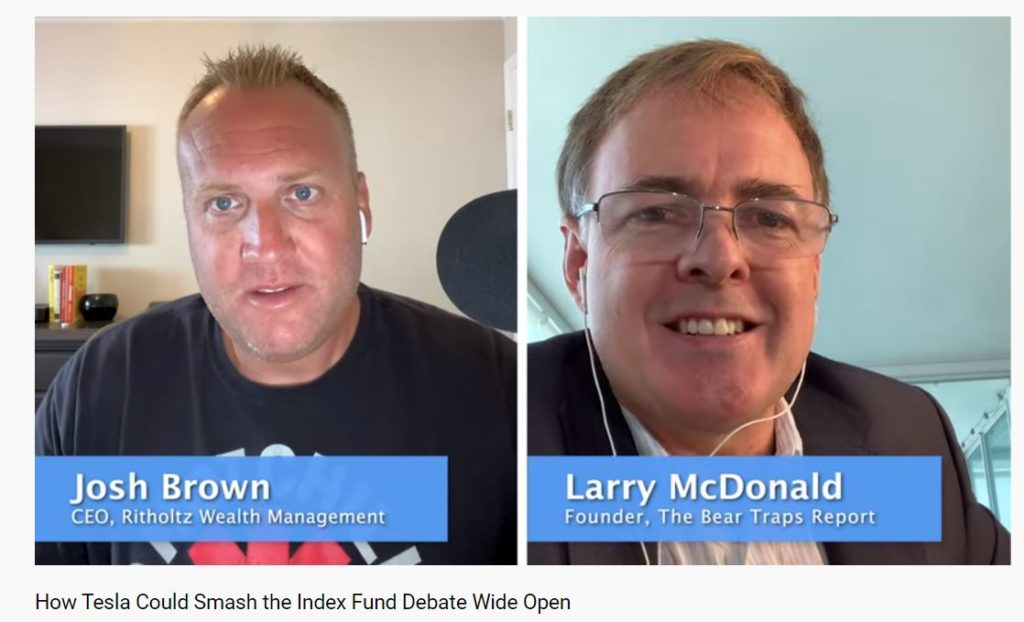