As the March economic data starts to come in from China, in the week ahead – that sound you’ll be hearing will be a loud sigh of relief coming out of the global bond market.

In Q4 2018, China threw a substantial amount of fiscal and monetary weaponry at its weakening $13T economy. Heading into the trade negotiating climax with the USA, we believe tax cuts and PBOC RRR (levels of reserves in their banking system) activity – all together – come to over $500B of stimulus. Three months later, those desperate measures are showing up in the data.

To us, the meaningful upside surprise in China’s March NBS Manufacturing PMI speaks to near term positive momentum for the industrial activity outlook for all of Asia. A trade deal with the USA will only add to these positive developments. China will extend the 3-month suspension of additional tariffs on US-made vehicles and auto parts, which expires on March 31, 2019, the tariff committee of the State Council said on Sunday.

Brent Oil likes the Data Coming Out of China 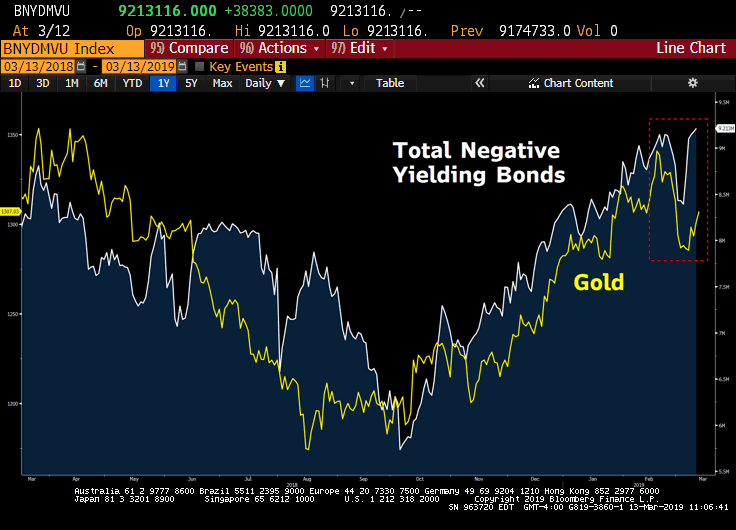 In Q1 2019, the global economy’s struggles have powered the tally of negative yielding bond on earth to near $10T. Economic data out of China this weekend will likely turn this ship around.

China March official composite PMI +1.6pts to 54 driven by manufacturing +1.3pts to 50.5 and non-manufacturing +0.5pts to 54.8. Could partly reflect lunar near year holiday distortions but also likely reflects the impact of China stimulus measures. “A Positive sign for Chinese and global”growth,” says AMP Capital. China delivered good news for global investors this weekend. This year, the country’s struggling demand had weighed on sectors such as auto producers and commodity exporters, worldwide – especially Germany. Likewise, with tariffs and uncertainty about whether a deal with the U.S. will be signed weighing on trade and no sign of a rebound in domestic consumption yet, there is still some work to be done in terms of getting more “buy-in” from the global investment community.

New Data is a Colossal Relief

In its largest surge since 2012, China’s manufacturing purchasing managers index rose to 50.5 from 49.2 last month, exceeding all estimates by economists – the consensus was looking for 49.6. In better news, new orders and new export orders – leading indicators which signal future activities, popped up to the highest levels in six months. Keep in mind, Germany’s economy and bond yields have a very high beta to China’s economic fortunes. As you can see above, over the last 5 years lows in German bond yields have been closely tied to periods where China’s Manufacturing PMI struggles.  This speaks to HIGHER global bond yields in the days and weeks to come – a bounce is long overdue.

Major markets in Asia surged on Monday following data released over the weekend that showed economic activity in China unexpectedly bouncing back in March. Mainland Chinese shares soared on the day, with the Shanghai composite up 2.58 percent to 3,170.36, while the Shenzhen component surged about 3.64 percent to 10,267.70. The Shenzhen composite jumped 3.571 percent to 1,755.67.Over in Hong Kong, the Hang Seng index was up 1.66 percent in its final hour of trading. – CNBC