Email tatiana@thebeartrapsreport.com to get on our live Bloomberg chat over the terminal.


This is a really important read and expresses our look down the road ahead. Some commodities in the metals space are up more than 20% this month, what gives? Let us explore.

Breaking: Silver futures currently on pace to settle 18% higher in three sessions. If that holds, it’ll be the fourth time that’s happened since 1975 and the second time it’s happened in 2020.

A Bear Traps Report Excerpt – The Power of the Cobra Effect

Anthropologist Marilyn Strathern paraphrased an observation from British economist Charles Goodhart thusly: “When a measure becomes a target, it ceases to be a good measure.” According to this thinking, a change in inflation from a “measure” to a “target” destroys the informational content value of reported inflation statistics over time. Because the Fed has targeted inflation, reported inflation numbers have become more and more useless in recent years. This, oh by the way – has placed the bond market into a deep sleep. A corollary to this development is found when a policy is anticipated, then the markets subvert it. What’s more, last week’s Fedspeak (Brainard, Harker public speeches) was focused on the topic of a far more aggressive inflation policy path coming from the Federal Reserve. Keep in mind, this was a first and rare public admission that they’ve had it (plain 2% inflation targeting) wrong all along. A shift in the traditional interpretation of the dual mandate is near.** Think of a Fed with an eye on driving policy with a much higher level of heat. The new belief? There will be gains for marginalized workers which will accelerate at very low levels of rates. Think of it as a formal Phillips Curve funeral, complete with trillions of green, dollar shaped roses showered all across the casket. They’re all in the Larry Summer foxhole now, “we must NOT hike rates until we see the white’s of inflations eyes.” As we observed in June, the Fed most certainly will rollout a formal inflation targeting change in the coming months. It’s traditional forward guidance with an inflation-targeting kicker, a game-changer for asset prices. The large move in silver over the last 30 days (nearly 25%), is telling us as much. See our bullish note on the commodities sector here.

**Inequality’s revenge. The Fed has been a LOUD, growing public target on the inequality front, and THEY SHOULD BE. The solution?  Think of a FAR more “social-justice” focused Fed.  As part of the dual mandate, additional targeting focused on helping marginal/minority workers in the Fed’s revamped policy review. “Modern monetary theory” MMT with social muscle sounds dangerous? We shall see.

Up from the March Lows

Metals: Investors poured money into precious firms equity offerings. This could be an ‘incredible bull market for gold / silver equities’ – A year ago, you couldn’t get Wall Street to touch most gold miners’ stocks. Today, it’s throwing billions at the industry. Precious-metals miners once seen as too leveraged and high-risk for the typical investor raised $2.4 billion in secondary equity offerings during the second quarter, data compiled by Bloomberg show. That’s the most since 2013 and seven times more than the funds they raised a year earlier.

Goodhart’s Law grew from monetary policy issues in the mid-1970s. As he put it: ‘Any observed statistical regularity will tend to collapse once the pressure is placed upon it for control purposes.’ It became the primary intellectual counterpoint to the Thatcher regime’s use of broad and narrow money targets in its monetary policy conduct. Today, if we apply it to current monetary and fiscal policy, we should infer that since money is being created and disbursed based upon past relationships between money and GDP, in fact, the longer we continue on the current policy mix, the less of a normal relationship there will be between money and GDP, which is the precise opposite of current consensus.

From Campbell to Goodhart

Goodhart’s Law grew out of Campbell’s Law, which states: “The more any quantitative social indicator is used for social decision making, the more subject it will be to corruption pressures and the more apt it will be to distort and corrupt the social processes it is intended to monitor.” Applying this law to the current governmental approach, we predict the current capital disbursements from the Treasury and Fed are destroying the relationship between capital and labor, as well as between the profit motive and capital formation. There is no more creative destruction. There is merely gaming the system.

Dollar Taking at Beating at the Hands of the Yen (Japan)

Has the Japanese yen become the world’s risk-off currency? Hard to process a $4 to $5 trillion federal deficit under a Republican Administration without concluding that either inflation is around the corner of the dollar is going to substantially weaken or most likely both. Some feel a blue-wave will lead to even more MMT experiments (modern monetary theory)?

Campbell’s Law is in turn an example of the “Cobra Effect,” which highlights the unintended negative consequences of public policy and government intervention in economics. The Cobra Effect is when the solution to a problem makes the problem worse, specifically by incorrectly stimulating an economy. All of this has rendered incoming economic data relatively meaningless in 2020. The utility value today of an economist is far less than it was just 18 months ago, the data has become far too erratic with little predictive value.

The Cobra Effect comes from a story from the British rule of India. Once upon a time, there were too many cobras in Delhi. So a bounty was offered for each dead cobra delivered. This proved initially successful, until, that is, entrepreneurs began breeding cobras for the income. Once the British authorities were aware of this unforeseen consequence, they stopped the program. So the breeders released their inventory, resulting in a larger cobra population than before the bounty was initiated. Hell hath no fury as a Cobra breeder scorned! 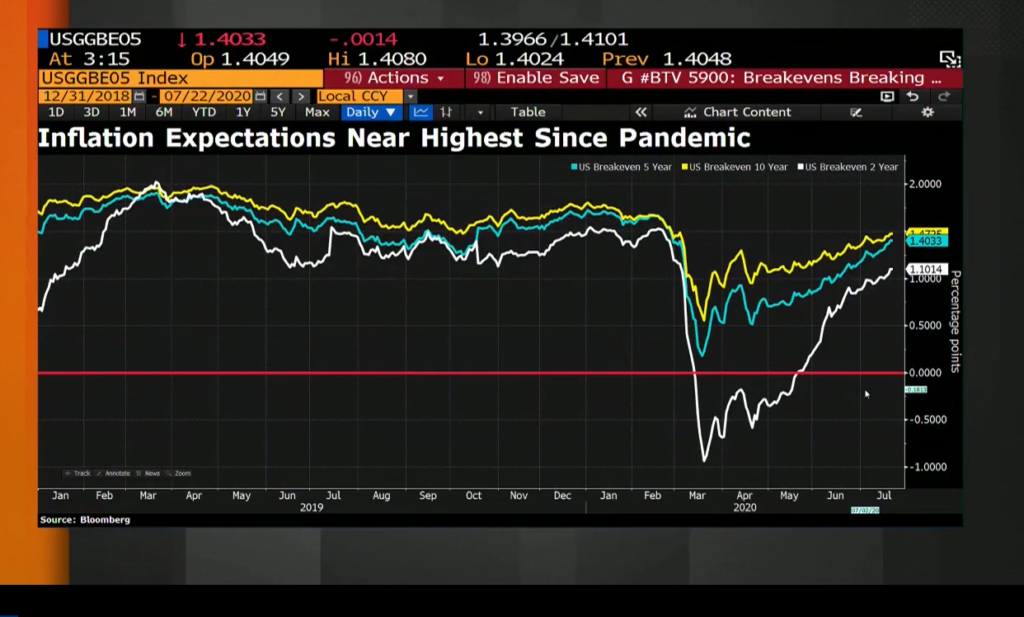 Real bond yields are plunging. Say you’re a billionaire in the middle-east with loads of short-term treasuries. Your return on investment, after inflation expectations, is paltry. What can you do? Buy commodities as a hedge, insurance. The TRUE cost of capital has never been this distorted. We now have $110T of debt on earth < 1.50% in yield, up from $35T in 2018. Inflation expectations rising with bond yields artificially suppressed by central bankers is a potentially toxic cocktail. When you do NOT allow the cleansing process of the business cycle to function over longer and longer and longer periods of time, there are two primary outcomes. 1) You create a proliferation of bad actors. Just picture 1000 Bernie Madoffs running around the Hamptons from one beach party to the next.  2) More and more money is searching for a “safe” new home. On earth today, there’s a lot more capital in the convexity risk zone, for sure. As more and more capital is sitting in places with an artificially suppressed cost of capital, return on investment – the potential wealth destruction becomes larger and larger if something goes wrong. “Don’t fight the Fed” in February, became trillions lost in March 2020.

We believe we are at the early stage of the biggest Cobra Effect in the history of economics. As the massive monetary and massive fiscal stimuli (over $15T globally) conjoin to save the economy from a deflationary depression, they will cause instead a hyperinflationary economic collapse. If the government becomes aware of this beforehand and withdraws current policies, then indeed a deflationary depression will follow, but one much more severe than if the government had done nothing. How far has the world turned in twelve months? The “Iron Chancellor” in Angela Merkel has formally capitulated this week, agreeing to issue common debt on a large scale. We’ve gone from a “black zero” – Germany’s austerity obsession, over to fiscal handouts to mathematically unsustainable debtors in the periphery. Somewhere Alexis Tsipras (Greece’s Syriza) and Dick Fuld (Lehman) are into their 4th bottle of burgundy wondering why they were born twelve years too early. They were dealt a far different austerity and moral hazard sword, one that doesn’t exist on planet earth today. On the fall of Lehman, in our New York Times bestseller – now published in 12 languages – we end the book with the words, “it didn’t have to happen.”

Returning to Goodhart’s Law, we note that any system can be gamed, as Jerome Ravetz’s research has shown, especially if the goals are complex. Essentially, those who are most capable of implementing a complex task, do so to their own benefit and thus to the detriment of the task. When these goals are quantified, used as a measure, and targeted, we have Goodhart’s Law.

The gold bugs have been lost for decades, precious metals have always been a game played on the fixed income field. Just take a look at 5-year U.S. Treasuries, after inflation your yield is -1.17%, that’s well on its way to a ten-year low – pure precious metals afterburner fuel.

“If I had to bet my life on higher or lower inflation, I’d bet a lot higher.”

This leads directly to the “Lucas Critique” on macro-economic policy when it is based purely on observed historical aggregated data. The basic idea of the Lucas Critique is that the consumption function used in Keynesian models cannot be structural (i.e. invariant) because they vary too much under pressure from government policy, which is to say, the relationship between consumption and disposable income varies according to many different stressors, and is much complex and difficult to predict than in standard neo-Keynesian models. In other words, if you change the rules of the macro-game, the structure you assumed wouldn’t change, in fact, does change, thereby destroying predicted outcomes. The Lucas Critique led directly to an increased focus on micro-economics. We may thus be assured of one thing, whatever the Fed and the Executive and the Legislature are doing, will have massive unintended consequences that are simply unimaginable.

In essence, our thesis is that Goodhart’s Law, Campbell’s Law, and the Lucas Critique are all being ignored by those implementing current monetary and fiscal policies. Basic economic assumptions, or structures, will turn out to be much more fluid than policymakers can anticipate. Therefore the results will be disastrous and unimaginable, we’ll survive and thrive after the adjustment process for sure. Assumptions on how markets work are derived from a shattered past. All predictions derived from the past are meaningless at best, counterproductive at worst.