“The seventeen year river of reserve currency buildup is no longer flowing.”


What used to be called a fringe selection of “perma-bears” has grown to a consensus.

Nine of 15 respondents in a Bloomberg survey at the end of June, including Standard Chartered Plc and Commonwealth Bank of Australia, predicted a China government-funded recapitalization will take place within two years.  Among those who provided estimates of the cost, a majority said it will exceed $500 billion, the smart money puts the tab well over $1T.  Hedge fund managers Kyle Bass puts the number near $10T.

If you do the math, there’s only one way out for China, a colossal currency devaluation.  As we stated to subscriber last July, a recapitalization will happen after the Chinese government comes clean with the true nonperforming loan figure.

In 2015, we witnessed China’s plunge in reserves of nearly $520B, in the last six months of the year the number has more than $400B, Reuters reported. Reserves fell by nearly $108 billion in December of last year, by nearly $100 billion in January and by around $28.57 billion in February of this year, before rising in March and April.

% of Respondents see a State Funded Bailout within Two Years

In Q1, net capital outflows from China in the first quarter of 2016 were nearly $130 billion, per Goldman Sachs.  China’s four biggest banks now trade at 32% discount to book value, capital flows have even the Bulls concerned.  Over the last 6 months, Goldman’s outflow data on China is 50% greater than SAFE’s onshore FX settlement data, there’s far too much fuzzy math in China.

Goldman notes that around 70 percent of the net outflows were due to Chinese residents buying foreign assets and 40 percent due to repayment of foreign-exchange liabilities. This was offset by an increase in inflows by foreigners buying renminbi-denominated assets.

“While it is possible that some residents’ acquisition of foreign-exchange assets now is intended for repayment of foreign-exchange debt later, this does not appear to be the case for the second half of last year.  We think China has masked (understated) FX outflow data by $20B a month this year.” 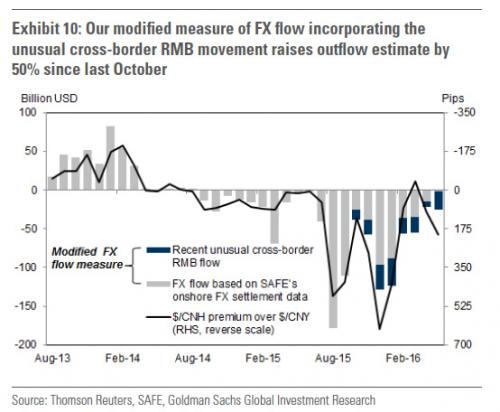 The Fed’s easy money gravy train has made more than a few stops in China.  As the U.S. Federal Reserve expanded it’s balance sheet in the post Lehman era, a lot of companies in China have sucked in mountains of debt at unrealistically low interest rates.   Just before the Lehman 2008 crisis, $3 in debt to gave you $1 of growth in U.S.   Today, it takes $6.50 of debt to create $1 growth in China.  It’s a colossal failure of common sense all over again.

An analysis by the Bank for International Settlements (BIS), published in March, that suggested a big chunk of the outflows were related to unwinding a once-faddish investment: Buying yuan offshore as a play on expectations the Chinese currency would continue to appreciate against the dollar as well as the mainland’s slightly higher interest rates amid a yield-starved world, says CNBC.

Of the around $175 billion decline in cross-border loans to China in the third quarter of 2015, nearly half came from offshore depositors backing out of the yuan, the BIS said, citing data from banks reporting to it. 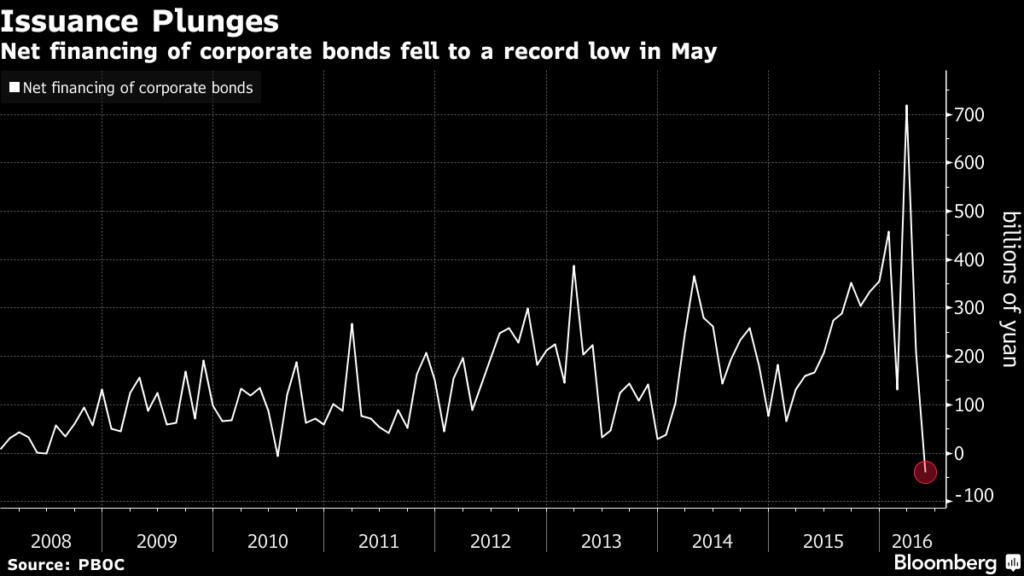 China debt load and banks are so interconnected.  Wealth Management Products WMPs are worth 27% more than China’s A-share equity market, this represents half of total bank deposits, explosive toxic growth.  China’s $3 trillion corporate bond market is “freezing up” amid rising defaults and canceled debt sales.  Over 18 publicly-traded Chinese bonds have defaulted so far this year, up from six in 2015.  More than 190 companies  have cancelled or delayed debt sales since the end of March.

Another big chunk came from Chinese companies paying down their foreign debt, said the BIS, which acts as a bank to central banks. It found that Chinese firms reduced their cross-border net debt over the third quarter, with the amount denominated in currencies other than the renminbi accounting for around $34 billion of the outflows.


Goldman highlighted that it was skeptical of the offshore debt repayment narrative.

Chinese lenders are struggling with a growing, smelly pile of bad debt after flooding the financial system with cheap credit for years to prop up economic growth. Per Bloomberg, non-performing loans jumped by more than 40 percent in the 12 months ended March to 1.4 trillion yuan ($210 billion), or 1.75 percent of the total, according to government data. The figures are widely believed to understate the true scale of the problem, we believe NPLs were probably closer to 15 trillion yuan  ($2.5T) at the end of last year.

The asset manager says it halted trading on the Standard Life Investments UK Real Estate Fund and its associated feeder funds at noon today. The suspension will last for at least 28 days and will remain in place until it is “practicable” to lift it, with the decision being reviewed at least every 28 days.

SLI said the move has been taken in response to a rise in redemption requests “as a result of uncertainty for the UK commercial real estate market following the EU referendum result”.

“The suspension was requested to protect the interests of all investors in the fund and to avoid compromising investment returns from the range, mix and quality of assets within the portfolio,” a spokesperson from SLI says.


The SLI fund has lower risk positioning, which should benefit investors, the spokesperson says. The fund had £2.9bn in assets at the end of May, with 13 per cent in cash. However, just as we saw in 2007, the liquidity mismatch between the fund and the assets it holds is leading to concerns.