For now the coup is contained but the west will not rest until new, rising risks are properly assessed.

We talking about $1 trillion of Global GDP is under military coup threat, something the world has never seen before.  Civil war and EU migration risks are sharply on the rise as Turkey’s ruthless Erdogan regime crushes civil liberties in their coup retaliation.  Turkey’s political climate is about to become even more oppressive and authoritarian, this increases risks as many will flee the country or stay and fight the regime. 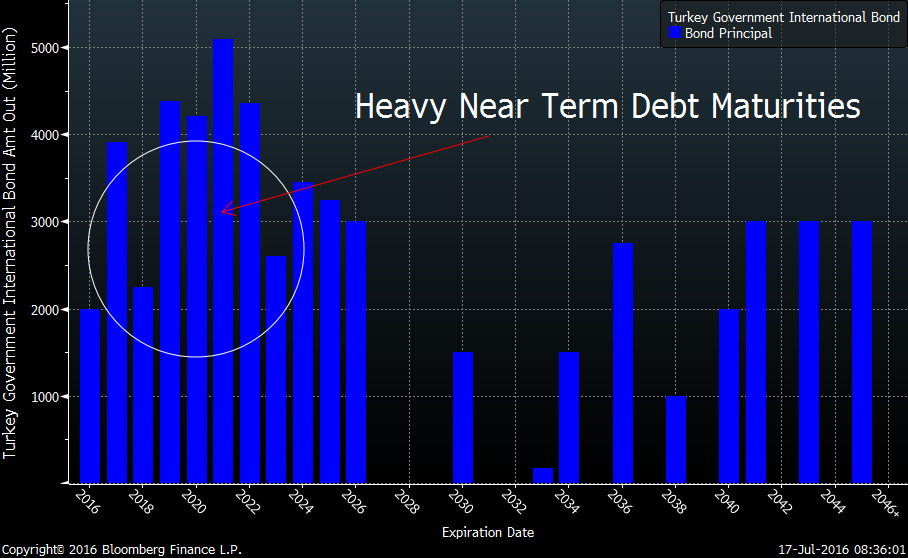 Nearly $60B of total government debt, but near term maturities are on the heavy side for Turkey.

*ERDOGAN URGES TURKS TO RESIST COUP IN SQUARES AND AIRPORTS

More than 6,000 people, including military personnel, judges and prosecutors, have been detained.

Implications:  We expect a sharp flight to quality next week with the U.S. dollar being the big winner.  G10 currencies with risk correlation will suffer, other safe heaven currencies, the yen and Swiss franc will benefit.   Next week will kick off with heightened uncertainty.  Investors will start to analyze the longer term implications.  First, Turkey’s impact on the EU.  The migrant deal was not signed that long ago.  We expect a mass exodus from Turkey as the risk of a civil war have risen sharply.  We will see foreign capital fleeing the country, political instability provides additional risks that investors don’t need.  Migration from Turkey is the last thing over leveraged European governments need right now.  Brexit removed all doubt, the people of Europe have had it with millions of people jumping over the border and straining already challenged job markets as well as stressed social programs.  By stressed we mean deficit spending in the periphery well above EU stated objectives.

*ERDOGAN STILL IN CHARGE OF TURKEY, TO MAKE STATEMENT: OFFICIAL

Turkey’s currency posted the biggest one-day drop against the dollar since October 2008 as the country’s military said it has seized power. The lira plunged 4.6% to 3.0157 per dollar, the weakest level since late January.

When was the last time a trillion dollar economy has every gone into a military coup regime?  NEVER.

Since 1960 Turkey, a NATO member has been through the drama at least three takeovers by the secular-minded army.

Islamists based Ak Party government came to power in 2002, ever since the political influence of the military has been trimmed, until today.

As it seems now the Turkey is experiencing a full on military coup. Turkey has seen over 14 terrorist attacks in the past year alone.

Turkey’s prime minster Binali Yildrim has said the uprising is from the military ranks, but Prime Minister Yildrim maintains that he and his government is still in control. However, the military, in a email statement, said it had seized power.

War planes have buzzed the capital, gunfire has been heard and tanks are blocking roads in Istanbul. These developments are ongoing as it is not clear who has control at this point in time.


*ERDOGAN STILL IN CHARGE OF TURKEY, TO MAKE STATEMENT: OFFICIAL

*ERDOGAN URGES TURKS TO RESIST COUP IN SQUARES AND AIRPORTS

*TURKEY’S ARMY SAYS IT HAS TAKEN CONTROL OF COUNTRY

Turkey’s 5 Year CDS made a strange reversal this morning, then closed for the day.