March light vehicle sales equate to  16.62 million seasonally adjusted annualized rate of cars sold, this is the lowest pace in 25 months.  Today’s data is confirming a much feared negative trend for U.S. auto sales, they’ve declined on a year-over-year basis in nine of the last 13 months.

Auto sales were sluggish DESPITE BIGGEST INCENTIVES IN 8 YEARS, over $3500 per vehicle for U.S. automakers.

We view this as a sure sign of credit saturation, they’ve reached the last warm body to shoe horn into a new Honda or GMC Sierra.


The Inequality Decade Rolls on in Ferrari

While the subprime, easy money gravy train (funded by the Federal Reserve) is propping up U.S. auto sales, the Big Winner is found in companies which are inequality’s rage like Ferrari.  With their 2017 high end sales coming in over $400,000 sticker price per car, Ferrari has been a colossal indirect recipient of central bank asset purchases.  The company has thrived in the QE (quantitative easing) / ZIRP (zero interest rate policy) era.   While middle class Americans struggle to make ends meet, Ferrari car sales are up nearly 50%.   In the election that shocked the world, President Trump’s victory was derived from states hit hardest by globalization, winning Ohio, Michigan, Indiana, Pennsylvania, Wisconsin.  From 2010-2016, wages in these states were off anywhere from 18% to 3%, BLS, Bloomberg data.  What’s Ferrari’s stock price and car sales telling us about global inequality and populism’s surge?

While the market attempts to digest the weakness in motor vehicle sales, it is worth pointing out, not all companies seem to be struggling.  Weakness in subprime auto loans along with bloated inventory totals, sent the share prices of GM and Ford much lower in today’s trading. The current weakness in consumer durables that we have also seen in retail, does not paint a very strong picture of how the economy is really doing. However, while excess debt and inventory buildups burden households and large auto makers, some car companies seem to be doing just fine.

Inequality Showing up in the Auto Market 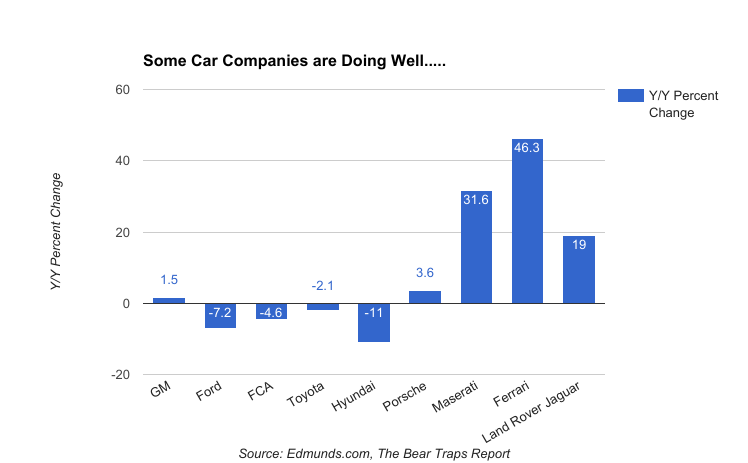 While the big three car companies (GM, Ford, FCA) showed year over year declines in car sales, and other more mainstream brands such as Toyota and Hyundai, also displayed weakness, Ferrari and Maserati did not have much of the same issues. Of course, the numbers for luxury automakers are much more volatile as they sell only a fraction of the cars, but to us it is noteworthy to see Ferrari’s sales rise by almost 50%, while the majors struggle.