If there’s one lesson from the Brexit and Trump experience, its don’t listen to establishment (bias) tainted polls.

This time Last Year, we were Lectured by the Global Media:

“There’s No Trump path to victory.”

“Trump is polling at less than 7% with women and Latinos, he’s unelectable with those numbers.”

Then Trump won 84% of America’s counties (2623 of 3112), and Michigan, Wisconsin and Pennsylvania for the first GOP win in 30 years in those states.  The lesson, don’t underestimate silent populism.

As you can see above, as odds markers see Le Pen bets on the rise – the Euro has been on the other side.  The Euro is off nearly 3% since March 27, around the same time Le Pen’s fortunes started to pick up.

With the first round of France’s presidential election less than three weeks away, Bloomberg is reporting the yield difference between the nation’s two-year bonds and similar-maturity German securities has widened to the most since 2012. 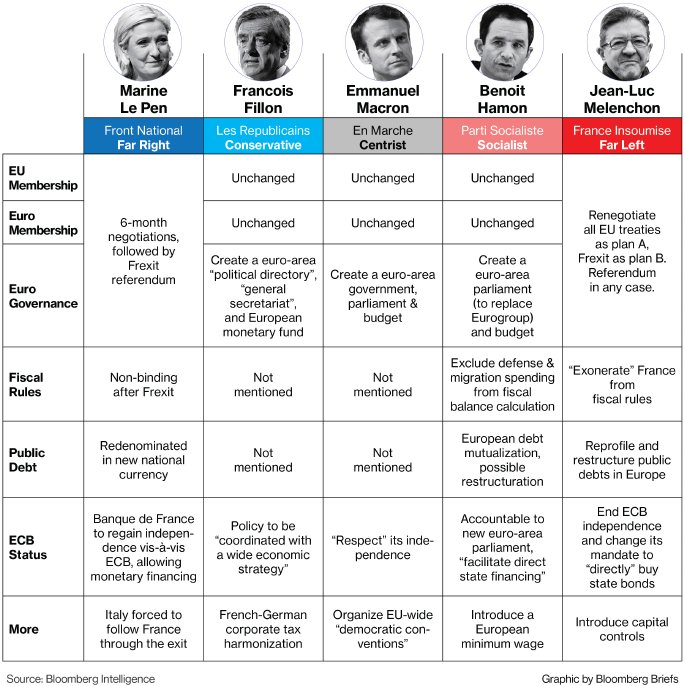 Le Pen in France is using the same playbook.

Where’s the Trade? Pick up our latest note here:

The latest move comes amid signs traders are starting to put election hedges back on as they enter the month of the election, even as polls continue to show euro-skeptic Marine Le Pen will lose in May’s second round. Per Bloomberg, French candidates are due to hold their second debate later today, with the first round of voting scheduled for April 23.