“In December, half of FOMC participants started to factor in fiscal policy economic growth conditions into their 2017 and 2018 outlook. With the Obamacare Repeal and Replacement legislation of life support, the stalled growth engines in Washington are piling up. The execution bar has rarely been higher for D.C. politicians to come together and pass their much heralded agenda. To us, the probability of caution coming out of the FOMC is surging. We think they walk back their fiscal policy assumptions for 2017-18. Bottom line: we are long term U.S. Treasury bulls through the TLT ETF and long Gold miners through the GDX ETF.  We still see 2% before 3% on 10 Year Treasuries.”

*Consensus of Wall St’s economists recommended an underweight in 2017, pure comedy year after year.  Weak dollar winners here: Emerging market debt ETF inflows continued for a 14th straight week, bringing the tally since late December to $7 billion, or 18% as a share of assets under management.

A more cautious Federal Reserve and a soft job market have been a colossal tail wind for gold miners and emerging markets.

Once again, the ADP jobs number (Wednesday) faked out Wall St.  We witnessed the largest spread between the ADP and NFP result in years.

– We’ve pounded the table on bonds since December, think Yellen’s (surprise) speech Monday will take us well toward 2.10% on the U.S. 10 year Treasury Bond.   We believe there was a secular shift in consumer credit in Q4. Hardly anyone has noticed, but in the fourth quarter of 2016 there was a surge in financial stress across America, a shift in financial conditions that may have had a hand in the election outcome. The credit cycle is turning, right before our very eyes. In recent months, we’ve found a substantial amount of evidence in capital markets pointing to credit formation reaching a saturation point. If you look at high quality prime loans, there’s more evidence of a credit event in December 2016. Across the board in consumer credit we witnessed spikes in credit card charge offs, auto loans gone bad, sour commercial real estate, student loans and an uptick (above) in Prime Mortgage Delinquencies. We’ll be out with a consumer credit note later today.

With the Crowd Short Bonds, all they Do is Grind Lower in Yield, Higher in Bond Prices

As we stated to clients in December, we’re bullish – not bearish on bonds.  We believe we’ll get close to 2% before 3% this year.

– Big miss in the NFP number, 98k, vs 180k expected, has led to a further bid in bonds, taking them below 2.3% Friday morning. Wage growth was in line, as we expected, the drop in the work week also helped this case in the February numbers. While the headline data points of this report do not look strong, some of the internals are not so bad.

In December, Wall St. backed up the truck on the relation trade, they recommended clients buy financials, short bonds, underweight gold miners.  Year after year they’re wrong again.  They lectured us, “you need to be in infrastructure plays like copper.”  Today, like scared rabbits they’re running for the hills.

“If everyone is thinking alike, then somebody isn’t thinking.”

– Friday’s jobs number was pathetic for this stage of a mature economic recovery.  The number came in 82k below Wall St’s forecasts – and job growth for earlier months was revised down by 38k.  Based on industry data and household survey details, of course the Street blamed severe winter weather for the result.

-Employment growth in private service-providing industries also slowed sharply to 61k (compared to +125k in February and +153k in January), with the deceleration led by education and health services (+16k vs. +66k in February) and leisure and hospitality (+9k vs. +27k).

– While the headline NFP number was lousy, especially relative to the ADP number of 263k, some of the unemployment figures were positive. The unemployment rate fell 0.2 percentage points to 4.5% without us seeing a move in the labor force participation rate. This suggest the labor market is in fact tightening. It is also the lowest the lowest reading in U3 since May 2007 (4.4%). This was seen in the U6 number, measure of underemployment, had a big drop from 9.2% to 8.9%. Prime age employment to population figures also ticked up to 78.5%. These fundamentals are strong.

Retail jobs and Weather are the Big Culprits 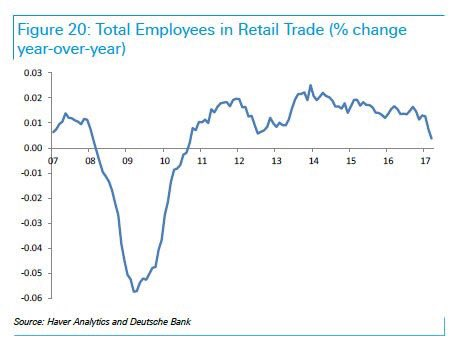 This is a profound secular change in the retail shopping experience, no one has a clue where it’s going to stop.

Retail jobs dropped 30k in the March reading and has now dropped almost 90k jobs since the recent high in October. The weather effects in the northeast were manifested in the weaker than expected construction job gains. At only +6k for March, construction jobs were much lower than the 59k number we saw in February.

– A continued poor showing in the headline figures was in the revisions. The revisions for January and February were 38k less than previously reported, taking the three month average job gains total 178k. However, this a number the Fed is more than pleased with.

“Our US Economics team increased their subjective probability that the next hike occurs at the June 2017 meeting from 60% to 70%, with the corresponding odds at 10% for July and 15% for September (down from 20% previously).”

Goldman doubled down on a June Rate Hike from the Fed, even with the soft jobs data.  By raising their chances of a June hike to 70%, they’re trying to project confidence in light of an economy which still has many structural deficiencies.