There’s a Helicopter Coming, the only Question is Size.

Breaking: Japan exports fall for the 9th month in a row, strong yen leaving a stain


Wall St. Research in One Image

All lawyered up, Wall St. research has become group think gone wild.  Analysts are terrified of stating their mind, opinion and the net result is one crowded trade after the next.  In January, they lectured us in all the reasons dollar yen was heading to 125.  By June, the same confused group was telling us she will finish the year near 100.  Dreadful.

Do you expect helicopter money in the Next 12 Months? 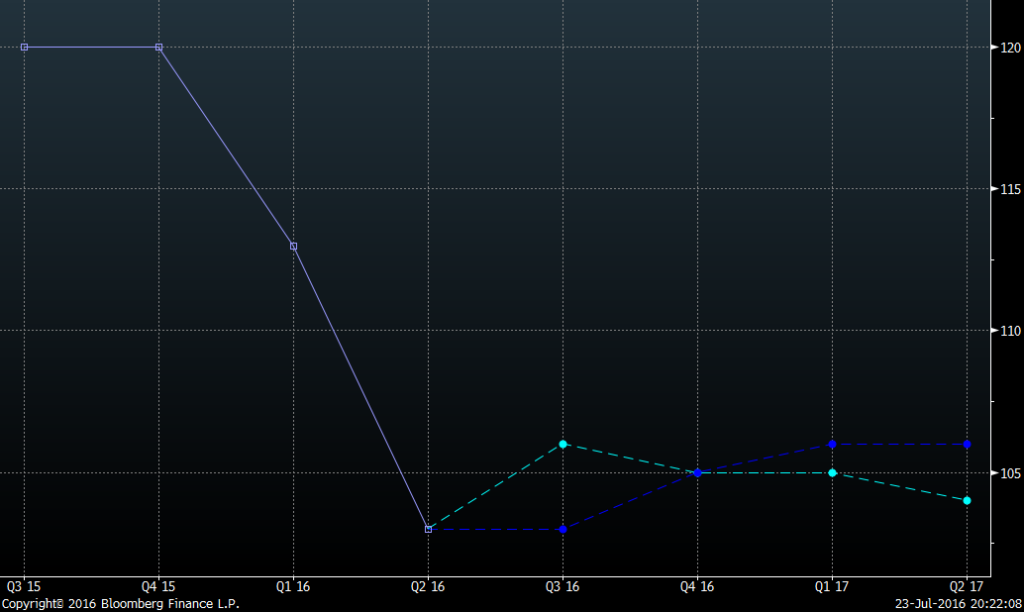 Here, one can see how worthless Wall St. Research has become.  Young analysts huddled together in fear, lemmings running off the cliff.  Beware of this crowd.  In just six months, the median dollar yen forecast from Wall St, has plunged from 120 in January to 102 in June, it will likely finish 2016 back up at 120.  Student body left – student body right.  The fight for job security in an industry ravaged by layoffs, prevents this timid bunch from thinking outside the box.  Get on the Bear Traps report today, click here below:


Meticulously measuring market expectations is the key to trading stocks and bonds in a Mad Max world of central bank’s heavy hand influencing markets.  We’ve stressed to subscribers in recent years, because of zero interest rate policy and negative interest rate policy, alpha is harder and harder to come by.  We now live in a bizarre world where once “emergency measures” have become the norm. Crowded trades are littered across the field, beware of them.

This week, we spoke to more than one hedge fund manager long U.S. stocks out of “fear of a daisy cutter” out of the Bank of Japan.   Many professionals are buying stocks  not based on valuation or earning outlook, but out of central bank worry (what might they do).  The biggest fear is a large scale move by the BOJ that triggers a colossal short covering rally, leading to a blow off top.

This Week’s Bank of Japan Meeting, How High is the Bar?

Late last week, Bank of Japan Governor Haruhiko Kuroda reiterated that the BOJ is ready to ramp up stimulus if needed.

Dollar yen is up 7.5% from the Brexit lows as the market is pricing in some kind of helicopter. In the June – July time frame, international demand for Japanese products fell at it’s fastest pace since early 2013, the strong yen has crushed Japan’s global competitiveness.

The early stages of Q3 have seen a lot of pain for Japan’s manufacturing sector as conditions worsened sharply.

The BOJ has been making the point that there are different definitions of helicopter money.   They’ve referenced direct underwriting of government debt by a central bank is prohibited in developed nations.

BOJ has hinted a mix of both monetary and fiscal policies can boost the economy, and there’s nothing unusual in making that point.  It’s as if they’re feeling out the market, trying to measure how far they might have to go.  Stocks in Japan have surged as yen weakness takes hold, breaking out of a key technical downtrend.

Japan’s virtuous economic cycle is continuing, capital spending is relatively solid, and Japan is in a gradual recovery phase but an aging population has been driving inflation lower.

Central bank head Kuroda points out the uncertainty from Brexit won’t change the outlook for modest global economic growth I all likelihood.

Get our latest trading ideas here: